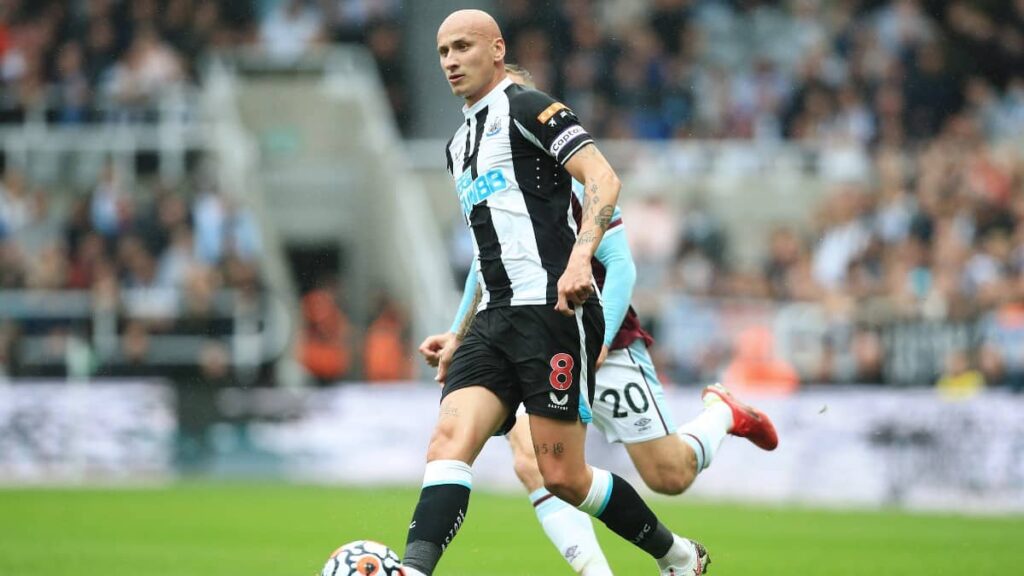 Due to a calf injury, Newcastle United midfielder Jonjo Shelvey has been ruled out of Saturday’s fixture against Aston Villa. This was announced in this morning’s press conference.

Shelvey sustained a similar injury earlier in Newcastle’s pre-season which resulted in him missing the majority of the fixtures. It was only in their last couple of games against Burnley and Norwich did he make brief appearances as a substitute.

Manager Steve Bruce told the media, “It doesn’t look as if Jonjo will make it for Saturday. He had a calf injury in pre-season and Sod’s law it’s his other one that’s the issue.”

Bruce also confirmed that young stopper Freddie Woodman will start this weekend, both Martin Dubravka and Karl Darlow are still out. Dubravka sustained an injury during the summer which has now become infected, while Darlow has still not yet recovered after contracting COVID.

He explained to the press, “the injury Martin’s had, unfortunately, has become infected, which is going to set him back another few weeks, and Karl has still not overcome the Covid situation he found himself in. They’re still a long way off, so Freddie (Woodman) will play again.”

Despite conceding four goals against West Ham last weekend, Woodman impressed many. He pulled off a couple of strong saves, as well as saving a penalty that was then scored on the rebound by Tomáš Souček.

Willock back for selection since signing permanently

Since signing from Arsenal for around £25 million, Joe Willock will now be eligible to play for the first time since becoming a permanent Newcastle player. He impressed on his short loan spell last season where he bagged 8 goals in 14 games for the Magpies.

Bruce confirmed that Willock would be in the squad for the game which was music to the ears of any Newcastle United fan. “I would’ve liked him to have a few more minutes in pre-season but he’s a young, naturally fit young man. He’ll be in the squad, that’s for sure. He improved us immensely with his goals from midfield and let’s hope he can carry that on tomorrow.”

The performance from Newcastle last Sunday was certainly a game of two halves. In the first 45 minutes, Newcastle looked in control leading 2-1 at the break with an early goal from Callum Wilson and then Jacob Murphy put them back in front 5 minutes before half-time. All the attacking flair seemed to evaporate once the second half got underway, the Hammers were able to grab another two goals.

When asked about the 4-2 defeat to West Ham this is what the Newcastle manager had to say, “first-half I thought it was a smashing game of football. Unfortunately in the second half, we got caught and what we can’t do is chase the game the way we tried to. We left ourselves open & vulnerable so we’ve got to make sure that can’t happen again.”

After a 3-2 loss to newly-promoted Watford, playing Aston Villa now might be an ideal time for Newcastle. There were positives to take from last weekend’s fixture and as long as they can keep it tight at the back, 3 points may not be that unrealistic for the Toon Army.