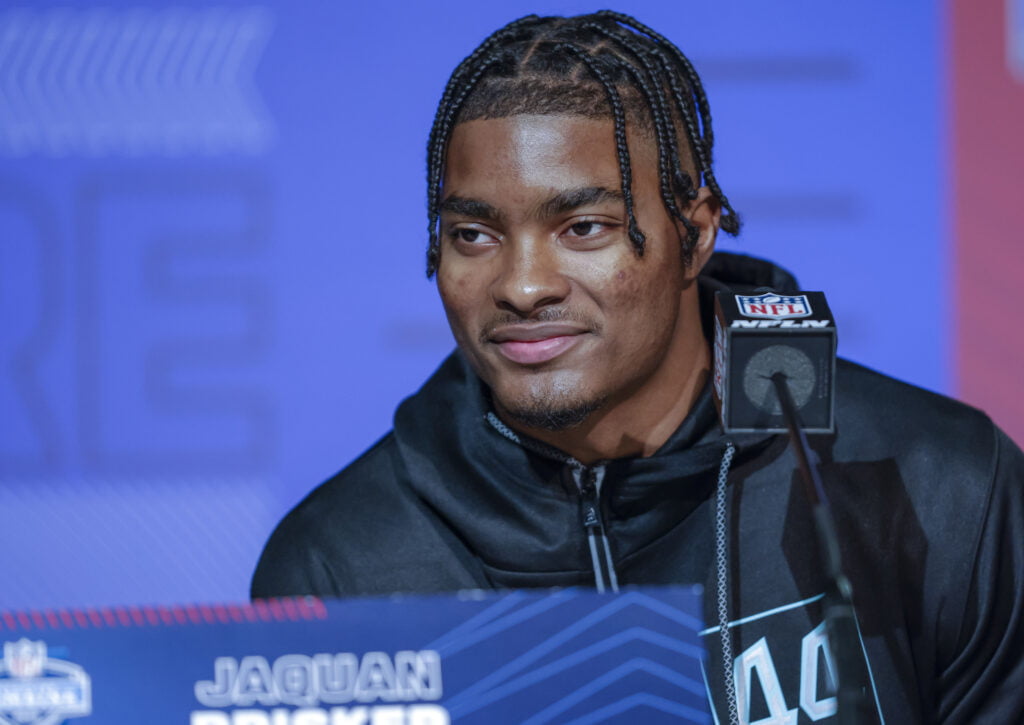 INDIANAPOLIS, IN - MAR 5: Jaquan Brisker #DB44 of the Penn State Nittany Lions speaks to reporters during the NFL Draft Combine at the Indiana Convention Center on March 5, 2022 in Indianapolis, Indiana. (Photo by Michael Hickey/Getty Images)

If there is someone poised to speak on the state of safeties in today’s game, it’s Jaquan Brisker.

Brisker is one of the top safety selections in the 2022 NFL Draft, and there’s an expectation that he’ll be gone quickly within the first or second round.

There’s already conversations as to why Kyle Hamilton isn’t expected to be a No. 1 overall draft pick, and the answer is frustratingly simple: the position simply doesn’t get the respect it deserves.

As Brisker notes, safeties are the “quarterbacks of the defense”, and hearing a safety that made Second team All-American and First-team All-Big 10 last year comment on how the position is still undervalued speaks volumes on how the game is viewed today.

That hasn’t deterred the 23-year-old Pittsburgh, Pennsylvania native on what’s been a challenging journey to the league. Brisker developed at Lackawanna College before transferring to Penn State, a decision that was rooted in improving the reputation that Nittany Lions safeties have gotten in the past. In 2021, the formidable safety endured a shoulder injury that he ended up playing through, a testament to his mental toughness.

By knocking down tape and improving his game, Brisker is now one of the top prospects at the position: a play-maker who could revolutionize the franchise lucky enough to land him.

The X Factor that makes Jaquan Brisker a first round pick is that he is a closer. When the game is on the line, 4th quarter, he’s in the right place to make a play.

Brisker spoke with FanSided before the draft to discuss his time at Penn State, making college football history, defending the reputation of defensive backs, and what it means to land a sponsorship deal with Sleep Number before his NFL career begins.

We’re really excited to see you heading into the NFL draft, but I was looking through your bio and saw that you went to JUCO. We have a little bit of an idea of what JUCO is like from all the reality shows that are out today such as Last Chance U, but I wanted to ask: what was your JUCO experience like?

Very tough but I enjoyed it. The people I met there — I met a lot of great people — but very tough, you know, just a small town, really thing to do. Not like Penn State, not like no other schools like that. So really, you’ve just gotta lock in, you know, just being a student and then you’ve gotta be awesome on the football field. But really just, you know, you’re only down there to handle your business.

What’s the one thing that you learned from that experience that helped you elevate your game at Penn State?

I’ll say watching film. That was like one the first times learned how to watch film. Coach Reiss, he did a great job of helping me and leading me into Penn State. Just teaching me tape, how to knock down some tape.

Obviously you have a lot of strengths heading into the draft and you’re being targeted, but there’s also weaknesses that people saw. I’ll just read a few: average route recognition, stares down quarterback, pursuit angles can improve.

Do these comments motivate you as you head into the NFL, and how has watching tape helped you with those things?

Comments like that, sometimes they’ll get to me, but it’s more just about proving people wrong and just handle my business, just checking a box. And watching film, it helped a lot with knowing what I have to do and then knowing what to look for, what to improve on. And then also, I do know my weaknesses and I know what I’m great at.

Asking around on @PennStateFball safety Jaquan Brisker, from an AFC Personnel executive: “He’s a plug and play strong safety because he flashes in coverage and isn’t the least bit afraid to throw his weight around in support near the line of scrimmage.” #NFLDraft pic.twitter.com/P5twWoUbDK

Definitely. So you’ve had this incredible career at Penn State, but after JUCO, you were actually being targeted by Alabama, which is another great football program. What made you choose Penn State over all those other schools?

Just to change the narrative around defensive backs — come in and establish them and change everything about the way they think about defensive backs. Just dominate: go to Penn State, and just dominate. Show them that they’ve never seen a safety like me, and especially up there on that [NFL Draft] stage, just change the narrative and just be different. Don’t be like anybody else.

So tell me in your words: what is the narrative that you’d like to change?

I feel like people don’t think Penn State DBs… I feel like they don’t respect DBs enough. Just by how they’ve played before, just… not that many DBs commit to Penn State. I feel like the narrative around defensive backs is that they’re not good enough. So just trying to change things like that, that they don’t have great safeties, which we do. So just prove a point.

Obviously, there’s so much in your game, but what’s one thing in particular that you did to help change that narrative at Penn State?

Be consistent in my play. I’ll say being more consistent than any other defensive back in the nation. Show my versatility in the run game, in the pass game, and just show up every Saturday.

Consistency is key. And speaking of consistency, one major strength that you have is that you played through a big shoulder injury in 2021.

What did you learn through that experience of playing through that injury because that’s something that you could encounter in the NFL as well?

Mental toughness, not giving up. Doing everything I can do for my teammates and for my family. So going out there, give it all got. Really, it always transfers to the spring, and spring was the toughest thing in college football because it’s spring workouts, but that’s where you find out if you’re really tough or not and you prove it with your teammates.

@JaquanBrisker been manifested where he’s at today. Good luck https://t.co/MDDo8Et9sx

Speaking of your teammates, you have quite a few teammates who are also going in the NFL Draft. We know Jahan Dotson, but there are so many others. You played with them, you were in the locker room with them — what are you excited for the rest of the NFL to learn about your Penn State teammates?

Yeah, and I’m excited to see how you all will enhance all these teams that you join.

So in this past season, you were part of a historic game, right? A nine-time overtime loss, unfortunately, but you’re a part of college football history.

Now the NFL has adopted this new overtime rule, so what do you think — especially as a defensive back — about the new NFL overtime rules allowing both offenses to touch the ball?

I’m not really used to it, probably not a fan of it. Just because, obviously, they want it to be changed, but if the defense did their job, then they wouldn’t have to change the rules. The defenses have big shoulders for a reason, so if the defense would have just gotten the stop the first time we wouldn’t be having to change rules.

What was it like for you in that huge game, how was your defense and your offense? How was that conversation after the game?

Really just couldn’t believe that we went into overtimes and really just kept going over, kept going for two, I think it was really a long game, and just the way everything was going, I don’t think people really liked the nine-overtime rule.

You said consistency, right? Going through that many times, it takes a lot of endurance and consistency. That’s awesome.

I’d like to ask you: who are some NFL safeties you try to model your game after?

Do you think we need to change the narrative in the NFL a little bit and get some more respect for defensive backs?

Yes, I think so. I think we should be like, literally right behind a quarterback, just because we make the same amount of checks back there. We had to refer to the corners, to the linebackers, linebackers to the defensive line, and we make a lot of calls back there, just like the quarterback. We’re just as important as the quarterback. And then, if somebody scores you know, everybody notices us — and if they don’t, then that means the safeties did a great job. So I feel like our job is just as important as a quarterback because when the quarterback throws an interception, everybody knows that. When a safety lets up a touchdown, everybody notices that, so we’re kind of in the same boat.

I love that you bring that up because I completely agree with you there. Definitely undervalued and should be highlighted more, and I’m looking forward to you bringing that and getting more attention for that.

But speaking of quarterbacks, Dak Prescott is obviously a huge face with Sleep Number, so I want to ask you about your partnership with Sleep Number. How has that helped you improve your game, and what are you looking forward to as far as rest and recovery as an NFL player?

It helps improve my game a lot just because I’m getting enough sleep know that helps me perform and be laser-focused. And then, looking forward to going to the NFL, it’s gonna be very important for me to recover, make sure my body is is recovering very well because getting enough sleep helps prevent injuries. That’s also going to help my performance, because once I get enough sleep, I’m laser-focused. And now I could move how I want. So really, just all aspects of helping me recover. They’ll help me sleep better, and then also help my performance, which are all key points to becoming a great star.

The future is bright for @JaquanBrisker! 😎 See how quality sleep has been a part of his journey to the 2022 #NFLDraft.