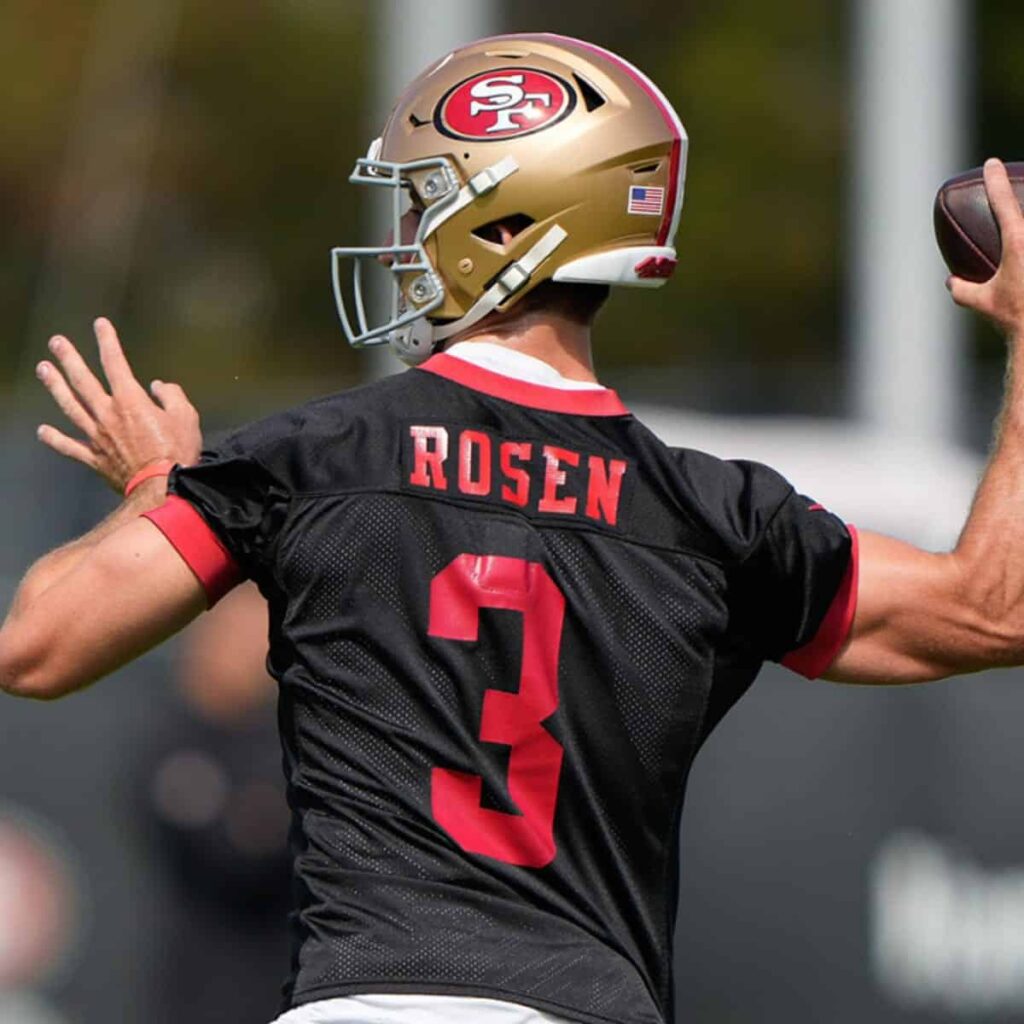 NFL Quarterback Josh Rosen seems to be one of those football players who reached their prime far too early in their careers. Rosen went from being a Five Star High School quarterback and possible number 1 draft pick to one of the biggest NFL busts in recent history. So what happened to Rosen and how did such a prospective franchise QB plummet to being cut from an NFL roster.

Before we dive into Rosen’s fall from grace, we have to look at his high school and college football success. Rosen’s life was surrounded by sports from an early age.

His father was a nationally ranked ice skater who almost qualified for the Winter Olympics in the 1970s, and his mother was the captain of the Princeton Lacrosse team. Before football Rosen grew up playing tennis; at age 12 he was the No. 1-ranked player for his age group in Southern California and top-50 in the country, and he became a top-10 player in junior rankings.

He was introduced to football in elementary school by a friend’s father who was a youth coach and decided to switch from tennis to football just before entering High School. Rosen attended St. John Bosco High School, a Catholic high school in Bellflower, California, where he had a 4.3 GPA.

In addition, he was named a 2014 USA Today High School All-American and was also named the Southern California Jewish Sports Hall of Fame’s Male High School Athlete of the Year.

During his High School playing career, he passed for 11,175 yards and 90 touchdowns. This spectacular High School performance led to Rosen being rated by Scout as a five-star recruit and ranked as the best quarterback in his class.

Rivals also ranked him as the best overall recruit. This ranking led to the QB being offered places by 15 D1 schools including Michigan, USC, Texas, FSU, and Notre Dame amongst others. However, he verbally committed to UCLA in March 2014, and officially signed his letter of intent in September.

An economics major, Rosen began taking classes at UCLA in January 2015; he enrolled early so he could take part in spring practice. With three-year starting quarterback Brett Hundley leaving UCLA early for the draft, a large hole was created on the team.

Josh Rosen was UCLA’s best quarterback during the spring, and he continued to compete during summer camp to be the team’s starting quarterback as a true freshman. Rosen’s time at UCLA was prolific with the QB breaking numerous school records and receiving countless awards and accolades.

Sadly his Sophomore season was ended prematurely as Rosen was injured in an October 8 loss to Arizona State, when he threw for a then-career-high 400 yards. He missed the rest of the season with a shoulder injury and had surgery on his throwing shoulder to repair soft-tissue damage.

However, to say he had a comeback in his Senior year might be an understatement. In the 2017 season opener at the Rose Bowl in Pasadena, California, Rosen completed 35-of-59 passes for 491 yards and four touchdowns to rally UCLA to a 45–44 win over Texas A&M, capped off by a touchdown pass to Jordan Lasley on a fake spike play with 48 seconds to go in the game.

The Bruins overcame a 34-point deficit, the largest comeback in school history and the second-most ever in the Football Bowl Subdivision. The following week, Rosen was 22-of-25 for 329 yards and a career-high five touchdowns in a 56–23 win over Hawaii. It was the 12th 300-yard game of his career, breaking the school record of 11 set previously by Cade McNown.

After leading the conference in passing yards per game, Rosen was voted second-team All-Pac-12. His season total of 3,756 yards passing broke Brett Hundley’s single-season school record of 3,740 which was set in 2012.

Due to his spectacular performances for the Bruins, Rosen was nicknamed “Chosen Rosen” and the “Chosen One”. On January 3, 2018, Rosen announced his intentions to enter the 2018 NFL Draft.

Nobody entirely knew where Rosen would end up in the draft however the majority of sources came to a consensus that he was a top 15 pick, in October 2017, CBS Sports published a 2018 mock draft that had the Cleveland Browns selecting Rosen with the No. 1 overall pick. Rosen was selected by the Arizona Cardinals with the 10th overall pick of the Draft.

He was the fourth quarterback to be selected that year behind Baker Mayfield, Sam Darnold, and Josh Allen, all of whom have had much more successful careers, with Allen just sealing a 6 year, $258,000,000 extension with the Bills. Most notably, however, Rosen was picked 22 spots ahead of 2019 MVP Lamar Jackson in the draft.

On May 10, 2018, he signed a four-year deal worth $17.84 million with an $11 million signing bonus. During training camp, Rosen won the backup position over Mike Glennon. He made his first regular-season appearance in Week 3 of 2018, replacing starter Sam Bradford with 4:31 remaining against the Chicago Bears and the Cardinals trailing 16–14.

Arizona lost the game to fall to 0–3, while Rosen completed four of seven for 36 yards and one interception. On September 24, the Cardinals named Rosen the starting quarterback for Week 4. In his first career start, Rosen passed for 180 yards and a touchdown in the 20–17 loss to the Seattle Seahawks.

He helped the Cardinals earn their first win the following week against the San Francisco 49ers when he completed 10 of 25 passes for 170 yards, including a 75-yard touchdown pass to fellow rookie, receiver Christian Kirk.

It was beginning to look as though Rosen might finally live up to his UCLA hype. However, In Week 7, Rosen had two of his three interceptions returned for touchdowns, lost two fumbles, and was sacked six times in a 45–10 loss to the Denver Broncos.

Still ranked among the worst offenses in the league, Arizona fired offensive coordinator Mike McCoy and replaced him with their quarterback coach, Byron Leftwich. In Week 8, Rosen led the Cardinals to an 18–15 comeback win for a season sweep over the 49ers.

He threw a career-high 252 passing yards and two touchdowns, including the game-winning score to Kirk with 34 seconds remaining to rally the team from a 15–3 fourth-quarter deficit. Rosen finished his rookie season with 2,278 passing yards, 11 touchdowns, and 14 interceptions as the Cardinals finished 3–13 (3–10 with Rosen as a starter).

This poor rookie season would see the start of a rapid decline for the former 5-star quarterback. Due to his poor performances and a new offensive coordinator, the cardinals decided they needed a new QB if they wanted to change their fortunes.

So when the Cardinals had the 1st overall pick in the 2019 draft they took Oklahoma QB Kyler Murray and soon traded Rosen to the Miami Dolphins in exchange for the Dolphins’ 2019 second-round pick and their fifth-round pick in the 2020 NFL Draft.

With an aging Fitzpatrick in Miami, many believed that this was Rosen’s chance to reprieve himself in a new city. After an abysmal start to the season under Fitzpatrick where the Dolphins went 0-2 and were outscored 102-10, Rosen was given his first start in week 3 where he threw for 200 yards as the Dolphins lost 31–6 to the Dallas Cowboys.

In Week 4 against the Los Angeles Chargers, he threw for 180 yards, one touchdown, and one interception in a 30-10 loss. This was Rosen’s first and only touchdown pass as a Dolphin.

Following a Week 5 bye week, Rosen started against the Washington Redskins, but was benched for Fitzpatrick after three horrible quarters while throwing for only 85 yards and two interceptions. Rosen only appeared in one other game in 2019, serving as Fitzpatrick’s backup for the rest of the season.

After yet another poor season for the Dolphins where both quarterbacks failed to impress the organization decided it was time for a change and took Alabama QB Tua Tagovailoa with the 5th pick in the 2020 draft. Rosen was unable to surpass either Tagovailoa or Fitzpatrick on the depth chart, and Miami waived him on September 5 after failing to find a trade partner.

The former 1st round pick had fallen to the bottom of the NFL and been waived by a struggling franchise. From this point, Rosen’s luck never really changed. On September 8, 2020, Rosen signed onto the practice squad of the Tampa Bay Buccaneers and spent the next 4 months with the team.

Then on December 23, 2020, Rosen was signed by the San Francisco 49ers off of the Buccaneers’ practice squad following injuries to quarterbacks Jimmy Garoppolo and Nick Mullens, and practice-squad quarterback Josh Johnson being placed on the reserve/COVID-19 list.

Josh Rosen was active for the 49ers for their final two games but did not see any action. Surprisingly, the 49ers signed Rosen to a one-year contract extension in February despite never setting foot on the field. However, with the 49ers having a fit Garoppolo and taking Trey Lance with the 3rd pick in the 2021 NFL Draft they did not need to keep Rosen and released him on the 17th August 2021.

There is an abundance of debate surrounding the reason that Rosen failed in the NFL. Many believe that it is due to a poor work ethic and drive which left him faltering behind his competition, whereas others suggest that teams did not give him enough time to mature with both the Cardinals and Dolphins drafting top 5 quarterbacks only a year after signing Rosen.

Whatever the reason, Rosen is only 24 and still has plenty of time to try and make an NFL comeback and I’m sure we will see him as a backup or on a practice squad very soon. 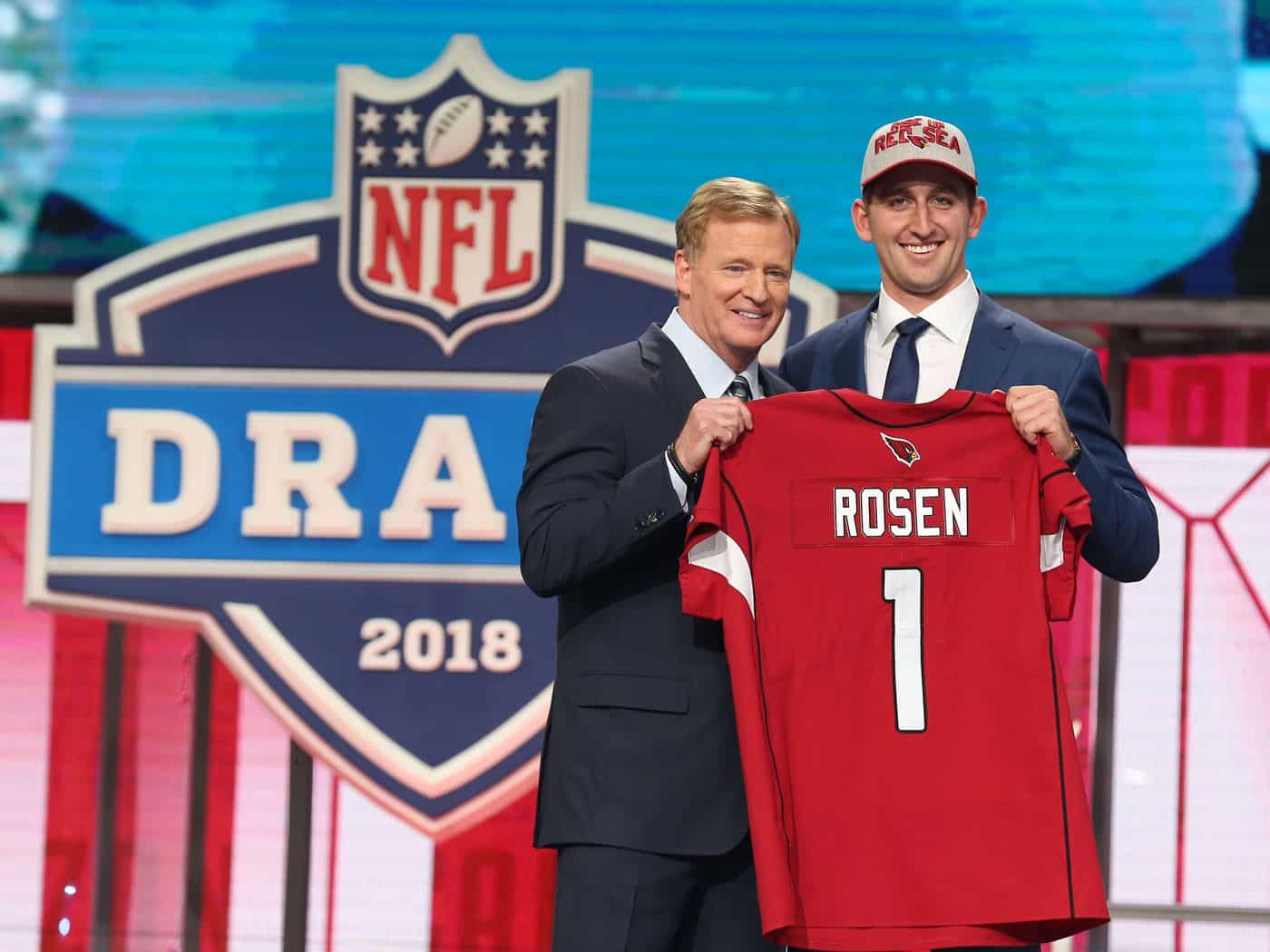