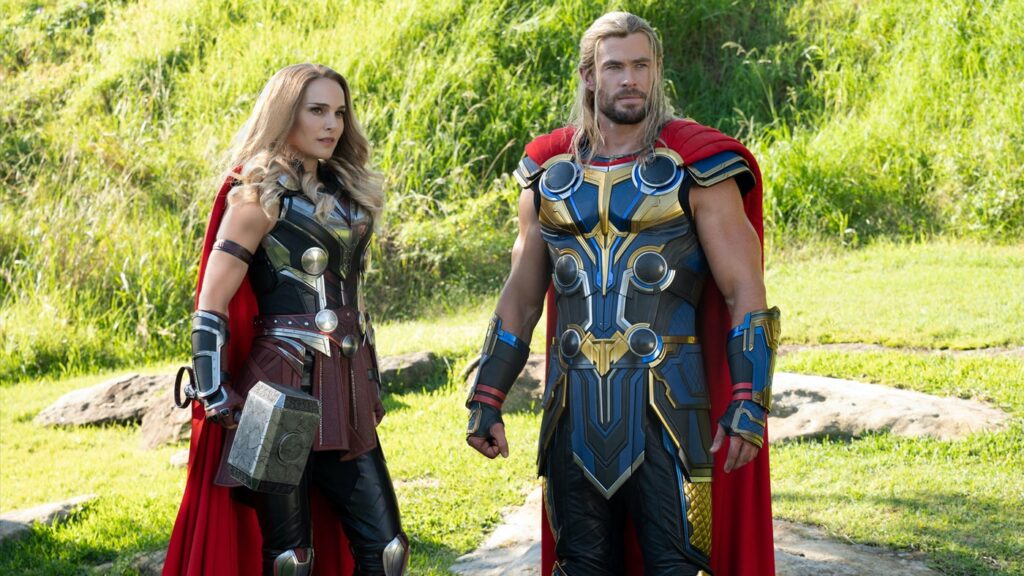 Superhero movies are like guitar solos. They can be a bit noodly, and tend to go on a little too long — but when they’re done just right, they absolutely soar, imbued with the kind of joy and wild abandon that makes you feel alive. Thor: Love And Thunder — Taika Waititi’s iridescent follow-up to the irreverent Ragnarok — is a giddy, gleaming guitar solo of a movie; a celebratory blast of colour, energy and emotion. It even has a guitar solo — opening with a shredding, squealing, Wyld Stallyns-style version of the Marvel Studios fanfare. 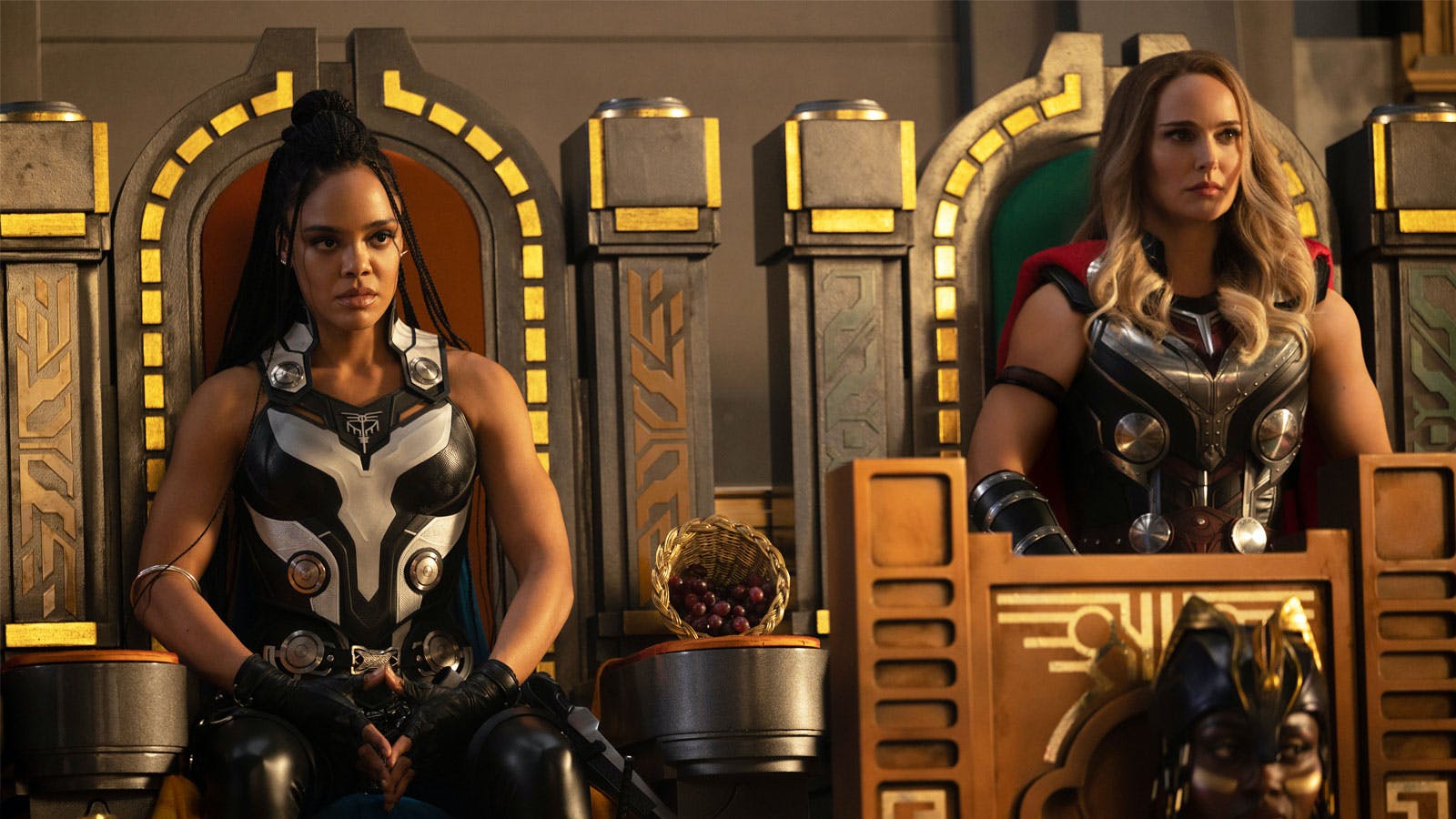 Last time around, Waititi’s mission was to make Thor really, properly cool — ditching the high-fantasy jargon and redundant sidekicks of the Norse God’s previous outings for a cosmic, campy space opera with lashings of self-deprecating humour and Jeff Goldblum as a gold-robed space-tyrant. Plenty of Ragnarok’s raucous DNA remains in Love And Thunder, cranked to even greater heights: Waititi’s own rib-tickling rock-man Korg now steps up as narrator, the Technicolor palette is overhauled in even lighter pastel hues, and this time it’s Russell Crowe’s turn to cut loose, his Zeus a preening prat of a Greek god.

But in many ways, it’s a different beast. Where Ragnarok sometimes teetered towards a tone of self-satisfaction, Taika Waititi is at his best when being truly vulnerable — offsetting the barrage of winking gags with explorations of loss, loneliness and inadequacy (see: Hunt For The Wilderpeople and Boy). Love And Thunder does just that. It is, appropriately, a film about love in all its forms — about its transformative and regenerative powers, and how empty life can feel without it. The film capitalises on the events of Avengers: Endgame beautifully — less in the team-up between Thor and the Guardians (a blast to watch, but they part ways fairly early on), more in dealing with the grief, self-hatred and guilt that the God Of Thunder is wading through. That void, that emptiness, Waititi posits, is worse than the pain that love can bring. 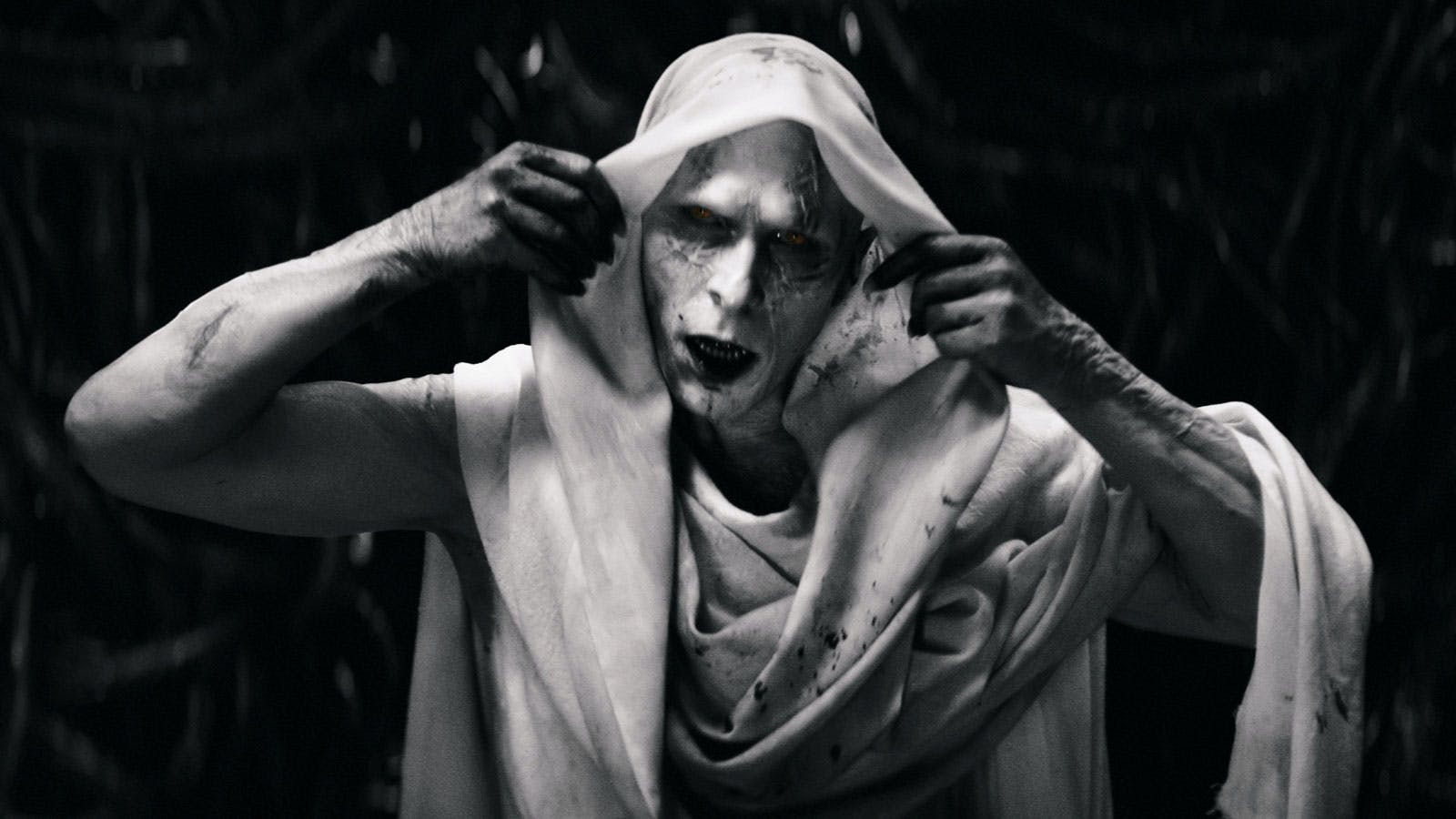 Much of love’s sting comes from the reintroduction of Natalie Portman’s Jane Foster. Taking inspiration from Jason Aaron’s comics run, Foster isn’t just back — she’s also wielding Mjolnir (whose new tricks make for a slew of ‘holy crap’ action beats) in the guise of The Mighty Thor. Largely forgotten by the MCU post-Thor: The Dark World, Portman makes an excellent Marvel comeback, given more to play with here than in all her previous appearances. She, too, gets to be vulnerable, wrestling with life’s biggest challenges while playing a Thor with very little experience of, well, being Thor.

If anything gets a tad lost in the mix, it’s Gorr The God Butcher. Taken from a different Aaron comics run, the deathly deity-slayer isn’t quite as foreboding as he is on the page, and jostles for space among Thor and friends (Tessa Thompson’s Valkyrie, too, comes out shortchanged) — though Christian Bale’s ghoulishly odd performance means he’s no Malekith-esque dud. Plus, Gorr’s connection to the Shadow Realm means he’s responsible for some of the film’s most striking visual moments — all colour draining from the frame in his presence, our heroes’ powers punctuating the gloom in neon bursts.