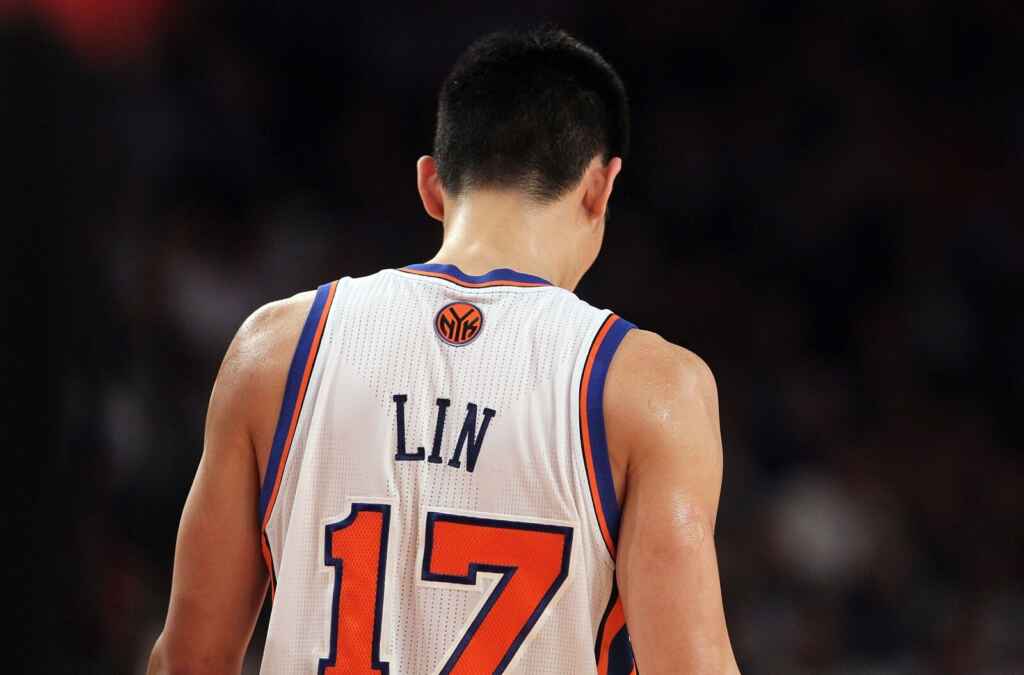 NEW YORK, NY - MARCH 20: (NEW YORK DAILIES OUT) Jeremy Lin #17 of the New York Knicks in action against the Toronto Raptors on March 20, 2012 at Madison Square Garden in New York City. The Knicks defeated the Raptors 106-87. NOTE TO USER: User expressly acknowledges and agrees that, by downloading and/or using this Photograph, user is consenting to the terms and conditions of the Getty Images License Agreement. (Photo by Jim McIsaac/Getty Images)

The year was 2010, and this Harvard graduate was a California native of Chinese and Taiwanese descent. You can count the number of Harvard alumni to get drafted and play in an NBA game with one hand — it takes two fingers, to be exact. And to be Taiwanese? Even fewer fingers. So it wasn’t surprising to have never heard of this kid; even when checking the list of names called during the 2010 NBA Draft, you wouldn’t find Jeremy Lin’s name on it.

Somehow, the appeal and rareness that turned Yao into a sought-after asset might’ve slightly killed Lin’s chances of making it to the NBA. He was no longer “the first” but just “another.” Combine his ethnicity with his college of choice and you’ll find the ultimate pass-by player to ever be considered by a U.S. professional basketball team. To be honest, there were between none and zero chances Lin would make a roster by way of the draft, and in retrospect, it’s as simple as that. In fact, that’s exactly what happened, with a full 30-franchise market leaving Lin’s name on the board forever that night.

Luckily for Lin — and eventually for every basketball fan like me around the globe — the Golden State Warriors gave the atypical guard a chance that summer and signed him as an undrafted free agent for the 2010–11 season. They put him on the court 29 times. Then, they mercilessly cut his body from the roster in December of 2011 only for Houston to pick up the residue and discard him just days after putting him in their system. But, this initial failure all made it perfect for Lin to cook up a name for himself in the most American way possible: by becoming a New York Knick legend for life.

Signing Jeremy Lin was the most ridiculous thing ever — and it was the most Knicks thing ever. New York already had signed Toney Douglas, Mike Bibby, Iman Shumpert, and Baron Davis as their point guards. It’s not that the team lacked options, reserves, and patches. Lin was, in fact, just another guy on which you’d rather not have to rely upon. But Lin was also a potential asset — in that he was an end-of-the-bench dude who wasn’t going to complain, was always going to be there humbly waiting for his turn, ready to scrap on the court, but wasn’t going to cause any major trouble or headache by watching his teammates from MSG’s luxurious courtside pines.

Here’s the truth: players don’t just come out of nowhere into the NBA, though it may sometimes look like that’s the case. This Bench’s End Guy didn’t turn into the Yellow Mamba overnight — again, that is only what it looked like and our twisted perception of mainstream media playing tricks on us. New York was, is, and will always be basketball’s Mecca. If anything basketball-related ever defined New York it was the never-ending relation with the point guard position and the personification of the role most of the players that come from the Five Boroughs have always carried. Lin was fully prepared for this moment. We weren’t.

A lucky accident, then, that Lin found himself at the point position — in a global metropolis of diverse fans who loved nothing more than a dope point guard. People see crazy shit in New York, so they wouldn’t necessarily blink twice if they saw the first Taiwanese-heritage, Harvard-graduate hooper on the hardwood. They just wanted to see a baller ball. And Lin could, in fact, ball.

Lin also played unselfish basketball or perhaps better said, lived a completely unselfish life, best illustrated by his days of sleeping on his family’s couch when he first entered the League. But his game IQ was always high — he played ball in the Ivy League, and as much it may be seen as the ultimate smart-ass clichés, it has to account for something — and his moves were always flashy, his plays entertaining, and being part of the Knicks — and its unparalleled fan-family — was only going to elevate his status even higher.

By the early 2010s, no big man was running the League like they once did, but rather the opposite. Contrary to the blind belief in the Yao Mings and Shawn Bradleys of the planet, the NBA was starting to become a league of smaller and more agile men, long wings, and an overload of mighty, mighty point guards: from Derrick Rose to Jason Terry, Chris Paul, Rajon Rondo, Kyle Lowry, Ty Lawson, Deron Williams, Devin Harris, Russell Westbrook, and a growing list of others (back then). Pair Lin’s arrival in the spotlight with a New York team that was missing their two blue-chip stars in Amar’e Stoudemire and Carmelo Anthony, and all of a sudden everything was aligned for the perfect constellation of instant stardom. February 2012 will live forever. In a span of 26 days and 13 games from Feb. 4 to Feb. 29 Jeremy Lin became a living fairy tale for those experiencing it in real time, and a legend for those of us narrating his exploits, light years later.

It all originated versus the neighboring New Jersey Nets. With 35 minutes in his stat line, 25 points, five boards, a couple of thefts, and seven dimes, Lin had arrived — for real this time. Marvelous at attacking the rim, a menace in the outside-to-the-paint corridor, devilish when having possession of the rock, Lin displayed his peak-shooter shape against a team that had no solution for the “Asian Equation.” If only those Nets had been the lone victims, we would’ve forgotten and simply gone back to our regular sanity. But they weren’t, and we didn’t. We had entered Linsanity.

Lin caught as many bodies as he wanted in the three weeks during which he steadily blossomed into the story of the season by saving a moribund Knicks franchise. Utah was the next victim (28 points and 8 assists), followed by Washington (23–10) and the official “Yellow Mamba” baptism inside the Garden. On a cold Friday in New York, with the Knicks hosting the Lakers — and Kobe Bryant by extension — Jeremy Lin unleashed hell on earth by dropping 38 points on the OG Black Mamba over 38 minutes of pure pleasure for Knick Fandom.

The once gloomy Madison Square Garden — never forget the Knicks had lost 11 of the 13 games before Linsanity erupted — transformed into a magical spectacle of fireworks, night after night, orchestrated by an Asian deity straight outta Harvard. Not the biggest of supernovas could have restrained the force of attraction Lin’s tiny but ever-growing and shiny presence exerted on that night.

The Lake Show slashing was the fourth of seven consecutive wins, and one of the overall 10 the Knicks would go on to achieve in the games in which Lin had played more than 25 minutes that took place that February. By the time the calendar pages flipped to March, and in those legendary 13 games, Lin counted his averages as 22.3 points, 9.0 assists, 4.2 rebounds, and 2.3 steals. Haters were still focused on pointing out his ridiculous 5.3 turnovers per game but had it not been for Mike D’Antoni’s all-out system and Jeremy’s own aggression, basketball would have never experienced Nirvana. The same people that once saw a black sheep in Lin —“he’s Asian, so we don’t want any part of him in our college, we feel secure in overlooking him on draft day, and we have all of the reasons to cut him any time we want” — ended seeing a golden cow in him: he’s Taiwanese-Chinese, he’s rare, he sells jerseys, he draws attention, he expands the market, he’s a winner. Ultimately, it turned out he could ball as f**k, and that he just needed an extended run, enough of a chance, some belief and trust. Like all of us probably do in our own ways.

His run only lasted a few more games, then the viral legend of Lin fell injured in late March and he never again dressed during the 2012 season, missing his first taste of the playoffs. As things unfolded, New York — again and unsurprisingly, in another of the dumbest/Knickest moves ever — let Lin bolt for Houston in the summertime.

Witty as it is, history — and a bunch of smart folks who already knew from years past what an international star with an already-built aura about him, such as, you know, Yao Ming — wanted Houston to become Lin’s next home, such as it had been months before. Lin’s story is one that never happens in the realm of sports. He went from unknown coach surfer and college graduate to superstar, and as incredible as it sounds, he got ruthlessly and abnormally dropped by the team that found him between a pile of all that crap.

Jim Dolan didn’t deem Lin worth $15 million. Only, Jeremy Lin’s value was far beyond that, or any other number. What’s the actual fan calculation of any player’s value if not the joy he brings every time he steps on the court — and whatever he does to please people and help them out of it? Chinese citizens, whether in New York or Beijing, would have kept on buying the No. 17 jersey, recording silly videos to later post on social networks and watching and rewatching YouTube clips of a phenom from their land as kids trying to make it to the NBA one day themselves.

Once he started playing for the Rockets, Jeremy Lin never reached the Linsanity craziness that took place in New York, not even close.

As if the Basketball Gods were still in debt with Lin for what he had made them write in golden letters in the Book of Hoops back in 2012, they awarded him the chance of signing with the Toronto Raptors — that losing franchise north of the border in another international market — in February of 2019. Faithfully, only 120 days, 31 games, and 460 minutes after signing that contract, Lin finally kissed gold himself and raised the Larry O’Brien trophy along with the rest of his teammates.

Ring on finger, poetic justice achieved, redemption completed, dreams fulfilled; this was a Linsanity that the League will literally never, ever experience in that same way, with that kind of player, again.