We’ve seen a host of clever logo reimaginings over the years, with the identities of famous brands subjected to retro, medieval and neon aesthetics (and many more), but this project is the most bloodcurdling. An artist who normally specialises in gory character art has demonstrated what would happen if he were to design a logo – and it involves a lot of blood.

The horror artist takes his hand to some of the most famous logos around, from the Android robot to Apple’s ubiquitous forbidden fruit. The Starbucks Mermaid and the KFC’s Colonel Sanders get zombified, and even the LG logo is given a creepy treatment in the style of Junji Ito’s Manga series Uzumaki. If you’re looking for design inspiration of your own, see our guide on how to design a logo. In the meantime, let’s take a look at these chilling but technically fantastic scary logo redesigns.

Taking inspiration from characters such as Jeff the Killer, Five Nights at Freddy’s and a dose of animatronics, artist Jordan Persegati(opens in new tab) re-invents the Starbucks logo as a zombie woman and KFC’s Colonel Sanders as what looks like a zombie mad scientist. He also redesigns Linux Penguin, the Discord and LG logos and the Monster energy drink logo (although that one admittedly already looks like something from a horror film, but Persegati manages to make it even more terrifying).

In each case, he draws half of the original famous logo and then completes it with a gory version of his own, while narrating in a calm voiceover with a deadpan sense of humour. Persegati commented on YouTube: “I’ve been having fun drawing characters in different art styles and it’s really pushed me out of my comfort zone.” 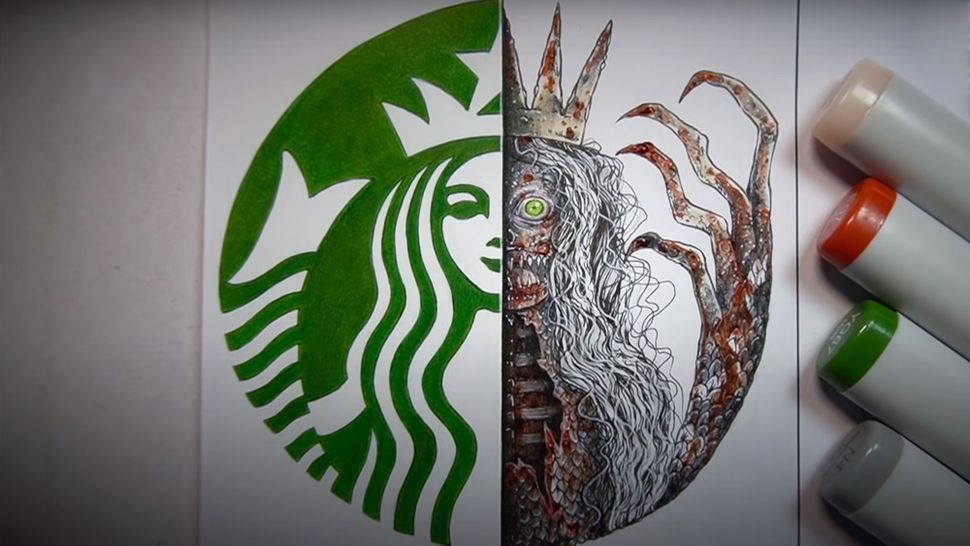 Viewers on YouTube are impressed. The first video’s notched up 1.5 million views and hundreds of positive comments, and Persegati has since followed up with a more recent video in which he subjects the logos of Apple, Android, TripAdvisor, the Chicago Bulls and Crocs to the same treatment (see below).

Persegati has great artistic flair and his work is wonderfully detailed, but we were also very impressed with how accurately he reproduces the original logos. Some of these brands should get in touch with him if they ever want a logo redesign for Halloween. “It’s almost like he reveals the true face of each company,” one viewer quipped on YouTube.

If you’re looking for more interesting logo projects, take a look at these medieval logo redesigns and these famous logos reimagined as Studio Ghibli characters. And if you’re inspired to embark on a logo design project of your own, make sure you have the best graphic design software to hand.