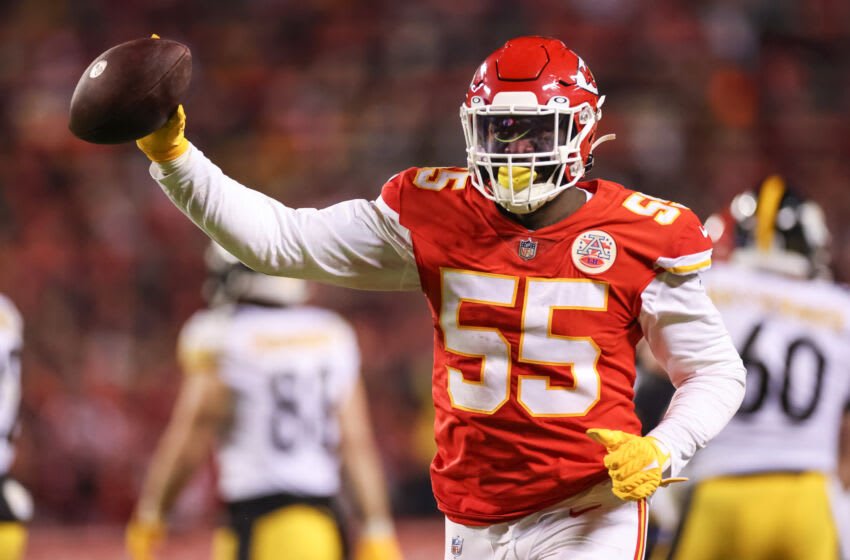 KANSAS CITY, MISSOURI – JANUARY 16: Frank Clark #55 of the Kansas City Chiefs reacts after recovering a fumble in the third quarter of the game against the Pittsburgh Steelers in the NFC Wild Card Playoff game at Arrowhead Stadium on January 16, 2022 in Kansas City, Missouri. (Photo by David Eulitt/Getty Images)

The Kansas City Chiefs will be without a key piece to their defense for the next two games due to a suspension.

This past weekend, the Kansas City Chiefs handedly defeated the San Francisco 49ers, the very team that acquired running back Christian McCaffrey. Kansas City’s offense averaged an absurd 9.1 yards per play, while the defense did their part in limiting quarterback Jimmy Garoppolo. But for the defense, they will be without one of their key starters.

On Tuesday, the NFL announced that defensive end Frank Clark is suspended for two games due to violating the league’s personal conduct policy. The suspension is in relation to his weapons arrest from 2021, which was resolved this past September.

The NFL suspended #Chiefs DE Frank Clark two games for violating the personal conduct policy from his weapons arrests in 2021. The case was resolved in September.

The Chiefs are on a bye this week, which means that Clark will officially miss the team’s games against the Tennessee Titans in Week 9 and the Jacksonville Jaguars in Week 10.

Back in June 2021, Clark was charged with two counts of misdemeanor possession of an assault weapon by the Los Angeles County district attorney’s office. Clark had pleaded no contest to both charges, where he was sentenced to one year of probation and 40 hours of community service.

Through seven games, Clark recorded 15 combined tackles, seven quarterback hits, three sacks, and one safety, the latter of which occurred in the team’s win over the 49ers.

Clark will return to the team for their Week 11 contest against the Los Angeles Chargers, but KC will have to survive until then.