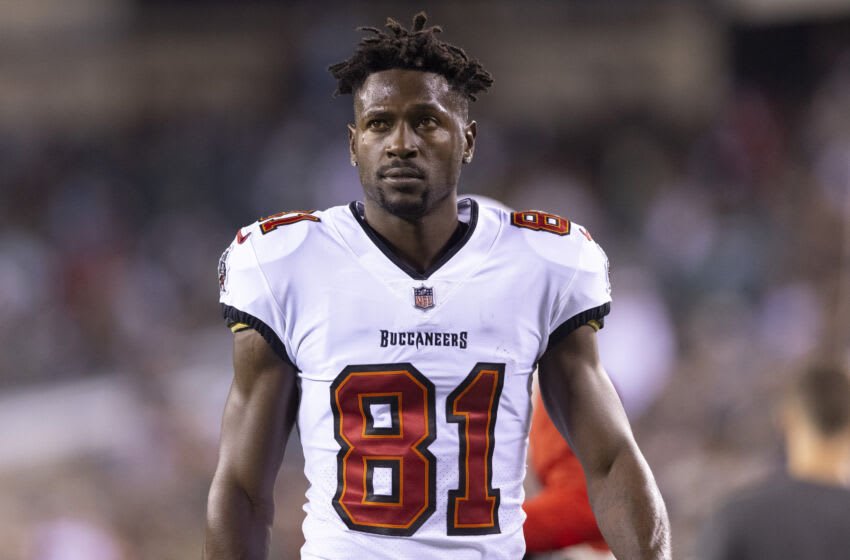 PHILADELPHIA, PA – OCTOBER 14: Antonio Brown #81 of the Tampa Bay Buccaneers looks on prior to the game against the Philadelphia Eagles at Lincoln Financial Field on October 14, 2021 in Philadelphia, Pennsylvania. (Photo by Mitchell Leff/Getty Images)

Kanye West, now known as Ye, is in the news following weeks of antisemitic remarks he has made. Companies like Adidas and Balenciaga have severed ties with the rapper, with the former happening on Tuesday.

Hours later, former NFL wide receiver Antonio Brown released his own statement, announcing that he will remain with Donda Sports as its president and that he supports West.

West went on a variety of antisemitic rants on social media. One that caught the attention of many was his Tweet which read he would go “death con 3 ON JEWISH PEOPLE.” He was subsequently suspended from Twitter and Instagram.

In a taped interview earlier this month with the “Drink Champs Podcast,” West proclaimed that “I can say antisemitic s*** and Adidas cannot drop me.”

Things only escalated, as there were demonstrators holding banners above the Los Angeles freeway that read “Kanye is right about the Jews.”

Adidas finally parted ways with West on Tuesday after saying they would review their relationship earlier in the month after he wore a “White Lives Matter” shirt at his Paris Fashion Week show.

West also lost his relationships with the Creative Artists Agency (CAA), Balenciaga, and Vogue. Gap announced that they were pulling all Yeezy Gap merchandise from stores and shut down the merchandise’s website. Foot Locker also joined in removing all Yeezy merchandise.