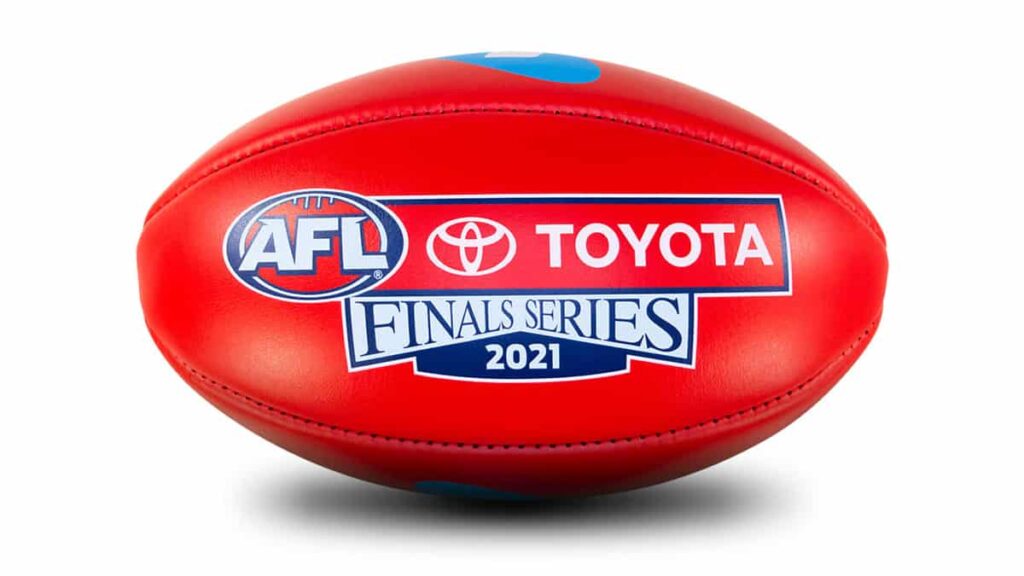 Port Adelaide flexed their muscles and booked a place in a preliminary final, for the second consecutive year, after knocking over Geelong in convincing fashion.

Able to play on their home deck with a restricted spectator capacity of 20,000 at the Oval, despite the Covid lockdown rules in other parts of the country, they were roared on by the home faithful and produced a very strong four quarter performance.

Following a competitive opening term, the Power were able to get on top with their pressure game that forced the Cats into some uncharacteristic errors. This led to them opening up a gap on the scoreboard and from there they never looked back.

Allir Allir, who made the recently announced ‘All Australian 2021 squad’, was a huge presence in the back line to nullify the opposition’s attacks. While, at the other end, forward Orazio Fantasia (pictured below) on his return from a hamstring injury made a real impact by booting four majors, in his first finals win, before being substituted.

Speaking post-game to Pirate Life, the club’s record games holder Travis Boak said “I think it was some of the best footy we played and our contest stuff, our tackle, our pressure was elite all night and that is what you need in finals. We played a very good side in Geelong but we held up the fight all night and to come away like that was outstanding. To have the support of 20,000 was incredible as well.”

On the performance of team-mate Fantasia, he continued “Obviously he has had a bit of an interrupted last few weeks and to still come out and do that was huge. We know what he brings to our forward line; obviously a lot of pressure and just so much smart and class around goals. His finish tonight was outstanding and to stand up like that in a big final was huge.”

Melbourne showed just why they are the bookmakers’ favourites for the flag with a powerful display to see off the challenge of Brisbane and get up by 33 points.

They dominated the first half, particularly in the midfield, thanks to the influence of Claydon Oliver and Christian Petracca. The only thing was not finishing off their fine play, inaccurate kicking, meaning they didn’t go into the interval with a bigger lead.

The Lions, dealt a blow early on with the loss of Dan McStay due to a concussion, fought valiantly, in the third, to reduce the gap and in with an outside chance.

Any hope of pulling it off, though, was shut down as Bayley Fritsch booted two quick goals, early in the fourth, for the Demons to go on and run out comfortable winners.

After the siren, captain Max Gawn spoke to Fox Footy; he said “If you finish top four then you’ve got pressure on you to come out and perform. We played an amazing game last week and knew that we had to back it up.”

Greater Western Sydney progressed to the semi-final stage as they managed to hang on to get over the line against their arch rivals Sydney by just a single point.

In what proved to be a thrilling encounter at the UTAS Stadium, the first time the venue has hosted a final, the Giants got the upper hand in the second quarter.

Toby Greene (pictured below), known for playing on the edge, was the catalyst for that with three goals. However, he will find himself having to front the tribunal, in midweek, after making contact with umpire Matt Stevic during a heated discussion at the end of the third – Match Review Officer Michael Christian grading it intentional.

The Swans hit back strongly, especially in the final term, and will be left ruing missed opportunities that cost them dearly. Issac Heeney, with a rapid-fire double, put them in with a great shout of pulling off the comeback, but their last six efforts were all minor scores and despite having all the momentum just run out of time.

Speaking to Giants TV, GWS captain Stephen Coniglio said “What a win, just incredible that last couple of minutes! All-time win and now three-zip against Swans in finals but more importantly just so proud of this group and what we have been able to achieve over this season. There were just so many incredible moments out there.”

He added “Mumford was immense today but just look around the whole field. Hoges unreal, Sammy Taylor again and Haynesy back there were awesome all day and Toby just does what he has been doing all his career and popping up and kicking some important goals in clutch moments.”

Cody Weightman booted an equal career-high four goals as the Western Bulldogs rediscovered their form, at the vital moment, in the defeat of Essendon by 49 points.

Coming into this contest on the back of three-straight defeats, including one to their opponents, they could have been vulnerable. However, it looked anything but and appeared to be back to their best as they completely controlled the second half.

The Bombers were kept goaless after half-time and so became the first side since Geelong, in 1956, of failing to register a major following the main break. The defeat also extends the club’s unwanted 17-year run without a victory in a finals campaign.

Jack Macrae (pictured below), Tom Liberatore and captain Marcus Bontempelli were brilliant in the midfield and pivotal in the Doggies’ first triumph at the pointy end since winning the flag in 2016. They did it the hard way that year, with four road trips, and will be relying on that experience as they would need to do the same again this time.

Speaking in the post-match presser, coach Luke Beveridge talked up his side’s chances of repeating that feat; he said “If you look at the teams that are still in it, we didn’t beat Geelong – that was after the siren – but we have beaten the other four. That recent history gives you that understanding that you are good enough.”

“Our guys have been unbelievably good on the road this year, travel doesn’t concern us and our guys will look at it as an exciting opportunity. The satisfaction in the players’ eyes and the looks on their faces and the understanding that our supporters would get a massive lift out of that.”