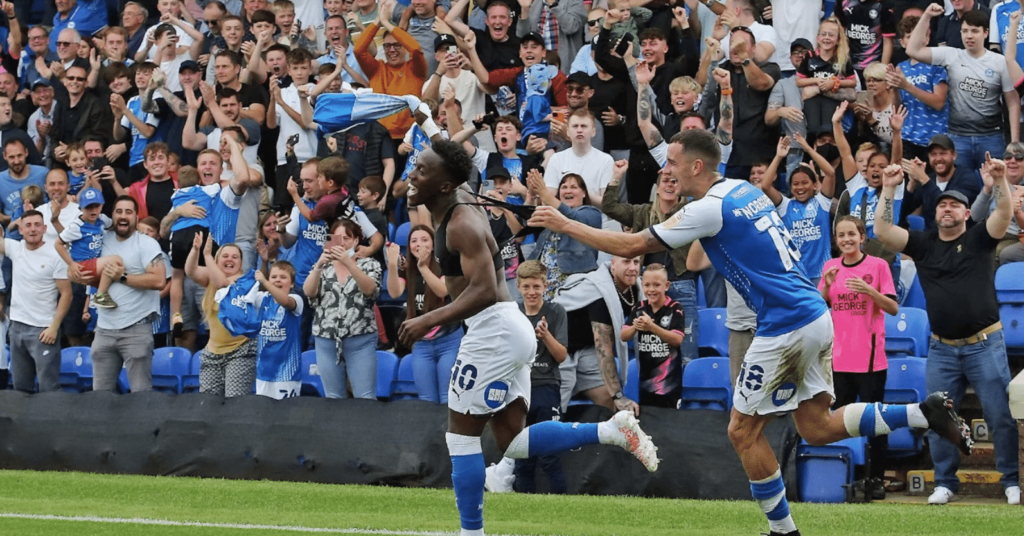 The arbitrary nature of the Championship is the reason none of the 24 competing teams has a 100% record, and we are just two games into the season’s advent.

In spite of Darragh MacAnthony’s protestations that he was lumbered with a £300,000 stadium repair fee after the club’s electricity was damaged by a flood, Peterborough made it all worthwhile on the pitch.

The Posh went 1-0 down when Jack Stratton lashed the ball home from close range.

The game looked out of reach, but with 10-minutes of added time the Peterborough bombardment was inevitable, Harrison Burrows tapped home into an empty net before Siriki Dembele finished cooly in the tenth minute of stoppage time to secure the Posh’s first win of the season.

Derby’s woes continue on the pitch, and the prospect of a relegation dogfight already seems a distinct possibility.

Following an opening day draw for QPR, manager Mark Warburton claimed his side was having to “get used to” the returning fans. It didn’t take the hoops long to get accustomed to those in attendance at the KCOM stadium when a Chris Willock strike troubled Hull keeper, Matt Ingram who parried it into his own net.

Lyndon Dyke’s deflected strike sent the Rangers fans behind the goal into delirium, doubling the west-Londoners lead early in the second half.

The scoreline was unflattering for the Tigers, who fashioned some pleasing football and squandered several chances.

Huddersfield began the game brightly, scoring an early chance that was adjudged to be offside. Yet, it was a goalkeeping howler from Huddersfield’s Ryan Schofield, who kicked the ball into the oncoming Mitrovic that rebounded into the net.

Fulham doubled and then tripled their lead before half-time, with goals from Josh Onomah and Carvalho.

In the second half Harry Wilson saw red, despite being down to 10-men, Fulham continued their assault on the Terriers goal with Ivan Cavaleiro claiming a brace. While the Cottagers top the Championship after week 2 of fixtures, Huddersfield sits winless in 22nd.

After the joys of an opening day win for both of these sides, this game was a comparatively forgettable affair between Birmingham and Stoke.

The game’s only goal came in the form of a Gary Gardner flick, only to be ruled offside to the dismay of the Blues supporters.

Proceedings ended all square at the Liberty Stadium, leaving Swansea and Sheffield still in the hunt for their first wins of the season after the disappointments of the opening weekend.

Swansea failed to make their possession count, and lacked penetration and creativity in the final third, Ramsdale was called into action just once.

A first-half own-goal from Kal Naismith followed by a header from Callum Robinson had the hosts 2-up before half-time. Albion was home and hosed by the 66th minute after Karlan Grant had the ball in the back of the net from close range.

A late revival from Luton, saw the Hatters get two back, but the Baggies clung on for their first 3-points of the season.

Forest’s poor start continued at home after a 10-man Bournemouth saw out a 2-1 away win, putting Scott Parker’s Cherries 5th in the table, and leaving Forest second from bottom.

Highly-coveted, Philip Billing was on the scoresheet with several premier league clubs tracking the midfielder.

Blackpool has won their first home league game in the last 4 out of 5 seasons, yet the tangerines return to Bloomfield Road was not a prosperous one.

Goals from Leandro Bacuna and Kieffer Moore saw Mick McCarthy’s side come out on top with a convincing 2-0 win.

Markus Schopp wanted to ensure first impressions counted at Oakwell, and they very much did. A beautifully weighted through-ball from Romal Palmer put Dominic Frieser through on goal, which he slotted home with aplomb.

Coventry was gifted a lifeline in stoppage time, when Jamie Ellen was brought down in the box, resulting in a penalty to the Sky Blues, only for Gyokeres’ effort to be saved.

Reading defeated Preston to record their first win of the season. Femi Azeez opened his account for the Royals, despite Preston clawing back an equaliser through Daniel Johnson.

Yet, the reprieve for the Lilywhites was brief, just 8 minutes later and John Swift tucked home for Reading, exiling Preston to the bottom of the Championship.

New signing, Uche Ikpeazu got off the mark for Boro after tapping in an inviting cross from Isaiah Jones. Like Ikpeazu, another new signing, Andy King equalised for Bristol City.

However, it was Boro’s Matt Crooks who finished off a brilliant training ground move, sealing all 3-points for Warnock’s men.

It wasn’t until the 64th minute that the Den erupted into life when Jed Wallace tapped home a cross. Blackburn equalised shortly after with a Ben Brereton Diaz header. The game commentator so aptly described as “an eminently forgettable affair” finished all even.