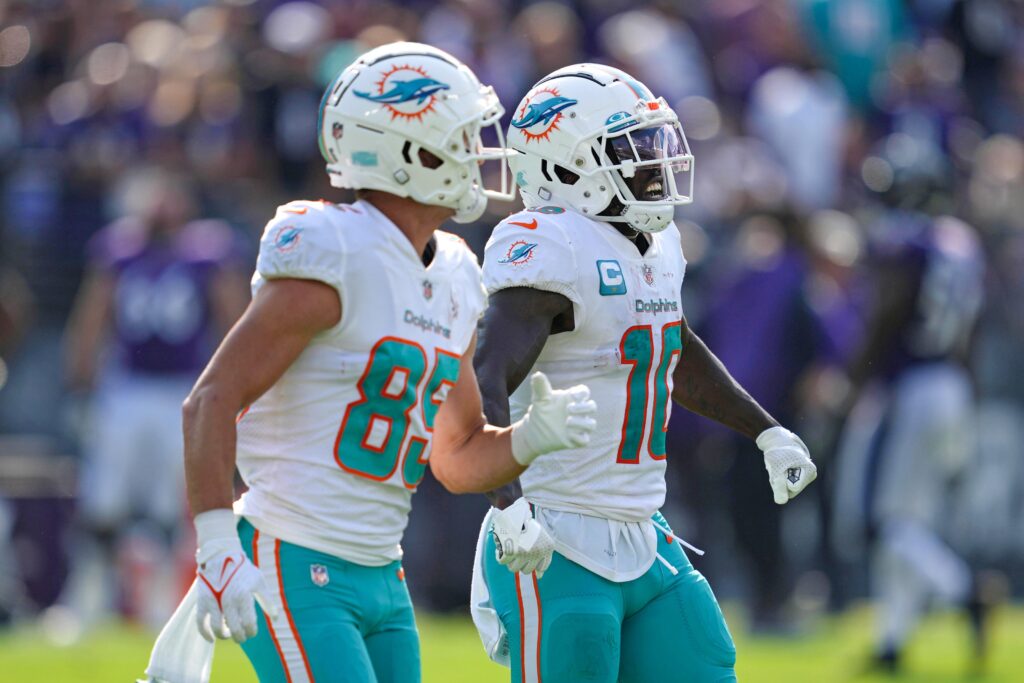 The Miami Dolphins — from the social media team to players and coach — spent all offseason telling you how good they are.

They have a chance to prove it Sunday.

Miami is 2-0 after a thrilling 42-38 comeback win on the road over the Baltimore Ravens, in which they scored 28 fourth-quarter points. Dolphins quarterback Tua Tagovailoa was brilliant, amassing 469 passing yards and six touchdowns, setting up a showdown for first place in the AFC East against the Buffalo Bills this weekend.

While Miami’s victory over Baltimore was engrossing, it also raises questions.

The defense got torched for 38 points and 473 yards. Through two games, the unit is allowed a league-worst 6.9 yards per play. The pass rush is a major issue, ranking 31st in pressure rate (10.9 percent) while blitzing sixth-most (39.1 percent) in the NFL. Only the Arizona Cardinals, Las Vegas Raiders and New Orleans Saints have fewer than Miami’s two sacks.

Offensively, in the first seven quarters of this season, the Dolphins’ offense only totaled three touchdowns. Then the group exploded for four in the final 15 minutes. What’s the real offense? The good news? Tyreek Hill and Jaylen Waddle rank first and third in receiving yards, and head coach Mike McDaniel is scheming big plays, with the Dolphins notching eight explosive plays between the duo.

The more concerning news is up front. Tagovailoa has been pressured 14 times, fourth-most in football. This by a pair of solid fronts in Baltimore and the New England Patriots, but nothing compared to the Buffalo Bills, who lead the league in sacks despite blitzing the least. It will also be a different look this week for Tagovailoa, who has been blitzed more than any quarterback this season save for Carson Wentz and Patrick Mahomes.

All of this leads to the ultimate question: can Miami’s offense be explosive against the Bills? Because if not, the defense has shown little reason to think it can stop Buffalo’s attack, which has rolled up a comical 72 points against the defending Super Bowl-champion Los Angeles Rams, and last year’s AFC top seed in the Tennessee Titans.

So what’s the answer for the Dolphins? How do they beat Buffalo and excite a long-suffering fanbase?

The best option might be to spread the defense out with small, fast personnel groups.

No team has more speed than Miami on the outside, with Hill and Waddle capable of taking any play for big yardage. The Bills won’t blitz, relying on a front four that can win without help. This means beating seven coverage defenders. For the Dolphins, their best bet is getting five receivers in the route, and with Buffalo likely to play a ton of two-high safety looks, either exploit man coverage or find holes in the zone.

If there’s one unknown with the Bills, it’s their corners. All-Pro Tre’Davious White is on the PUP list while he works his way back from a torn ACL suffered on Thanksgiving. Dane Jackson also didn’t practice on Wednesday after a scary neck injury on Monday night. If Jackson can’t go, Buffalo will be down to Taron Johnson and a pair of rookies in Kaiir Elam and Christian Benford.

While Buffalo’s pass defense ranks first in net yards allowed per pass attempt (4.0), that’s largely because of the pass rush. The Rams and Titans both have sub-par offensive lines and yet both consistently attempted to run into the teeth of Buffalo’s defense on early downs, putting themselves in obvious passing situations.

If the Dolphins throw to their speedsters on first down and create a few yards after the catch, suddenly Buffalo’s ability to rush with reckless abandon needs to be curtailed.

Of course, this won’t be easy. The Bills have one of the smartest defenses in football with head coach Sean McDermott and defensive coordinator Leslie Frazier joining forces to create a monster. Buffalo can try and squeeze down on the short routes, believing by the time Hill and Waddle uncover deep, Tagovailoa will be looking at sky. And if Miami goes empty, there’s ample reason to believe that’s true.

But for the Dolphins to pull the upset, they’ll need to make a bet. The best one? Spread Buffalo out, get the ball to Hill and Waddle on quick-hitters, and allow them to make plays.

If Miami can successfully do that on its way to a victory, the Dolphins will have made believers of a football nation by Sunday evening.