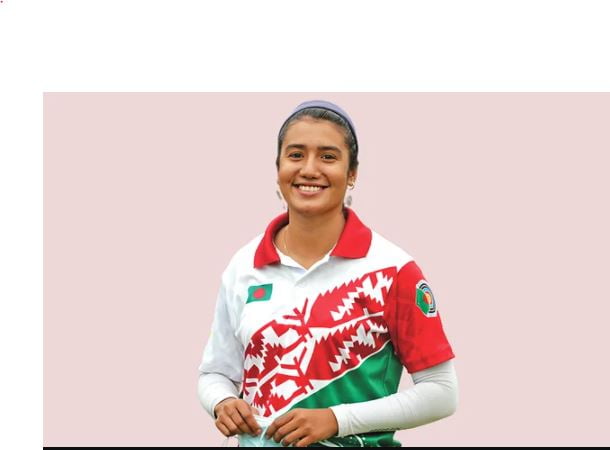 About a year ago. Archer Dia Siddiqui returned to her parents in Nilphamari from BKSP as she did not get a chance in the final team of South Asian Games. Desperate to leave the game. But after the Corona break, he returned to the international arena with a new lease of life. 2021 will be a memorable year for him.

What has not happened before in the history of sports in Bangladesh, this year has been a feat courtesy of Diya. Bangladesh has been playing in the Olympic Games since 1984. But in no event of any of the games, Bangladesh could not go beyond the qualifying round to the final round. In this year’s Tokyo Olympics, Bangladesh archery team has passed the qualifying round and played in the final round of the recurve mixed event. Dia was Roman Sana’s partner in this event. Roman advanced to the second round of the men’s singles, while Dia played in the first round of the girls’ singles.

Bangladesh won silver in the recurve mixed event at the World Cup Archery Stage Two in Switzerland. This achievement is also huge for Bangladesh which reached the final of the global tournament in Kalevadra. Here, too, with Roman companions. Bangladesh made history by winning a medal for the first time at the Asian Archery Championship in Dhaka. Dia was also in this team. No one from Bangladesh has been able to get on the medal stage even after taking part in Asian Archery eight times before. This time he won 1 silver and 2 bronze. In the recurve mixed doubles final, Rupa teamed up with Hakim Ahmed to win. Beauty Roy and Nasreen Akhter won bronze in the girls’ recurve team event.

The Premier Hockey League is back on the field after three years. Prime Minister Sheikh Hasina has given a grant of one crore rupees to the federation for launching domestic hockey. The change of hockey team has spread dramatic tension in Clubpara. Mohammedan Sporting Limited picked up Mariner Youngs defender Sarwar Morshed. The incident spread to the police station. This is the first time that the highest tournament of Asian Hockey Champions Trophy has been held in Dhaka. Bangladesh hockey returned to the international game after 40 months with this tournament. Goalkeeper Biplob Kujur, the only Bangladeshi to be ranked fifth in the tournament, was awarded the Best Emerging Player award.

This time Bangladesh Games has become the biggest event of domestic sports. The whole country was devastated by the second wave of Corona. However, the Games have been organized by the Bangladesh Olympic Association (BOA) under restrictions. At the same time, Bangladesh became the champion by defeating Kenya in Bangabandhu Cup International Kabaddi organized by Kabaddi Federation.

Chess players were busy in domestic and foreign tournaments throughout the year. Grandmaster Niaz Morshed, Ziaur Rahman and International Women’s Master Sharmin Sultana played in the World Cup in Russia. Jayatu Sheikh Hasina Grandmasters Chess has been held in Dhaka on the occasion of the 75th birth anniversary of Prime Minister Sheikh Hasina. On the occasion of Sheikh Russell’s birth anniversary, another international grandmasters chess was held in Dhaka with 33 grandmasters from around the world. This is the biggest chess tournament in the history of the country.

After the break of Corona, some vitality has returned to all the games this year. International gymnastics has been done in Dhaka. Bangladeshi-born gymnast Margarita Mamun, who won gold at the Rio Olympics, has visited Dhaka to be the goodwill ambassador of the tournament. After about 20 months, golfer Siddiqur Rahman returned to the course with an Asian tour in Thailand. Female bodybuilder Maksuda Akhter won the medal in the first part of the international competition. She became the third runner-up in the women’s physique category at the Olympia Amateur Bodybuilding in Mumbai.

Success was also in badminton. Bangladesh has become the champion in all the three divisions of the junior division of UNEX-Sunrise International Badminton held in Dhaka. However, there was no significant success in boxing, swimming, shooting, handball, basketball. Bangladesh finished third out of four teams at the South Asian Basketball Championship in Dhaka. Swimmers Ariful Islam and Junayana Ahmed were eliminated in the Tokyo Olympics. Shooter Abdullah Hale Bakio was also left out of the 10m air rifle selection. Athlete Zaheer Raihan is also disappointed. He could not do his best timing in running 400 meters. He became the eighth out of eight in the number 3 hit.

Although not on the athletics track, the country’s fastest man Ismail Hossain and Zaheer were in the discussion this year outside the track. Ismail was banned for a year by the Athletics Federation for questioning the selection process for the Tokyo Olympic Games. However, after three months, the ban was lifted. Another incident in athletics: Zaheer, who was arrested in a rape case, went to jail at 400 meters. The federation has banned him indefinitely.

volleyball team has become runners-up in the Asian Central Zone in Dhaka. Sri Lanka broke their heart in the final.