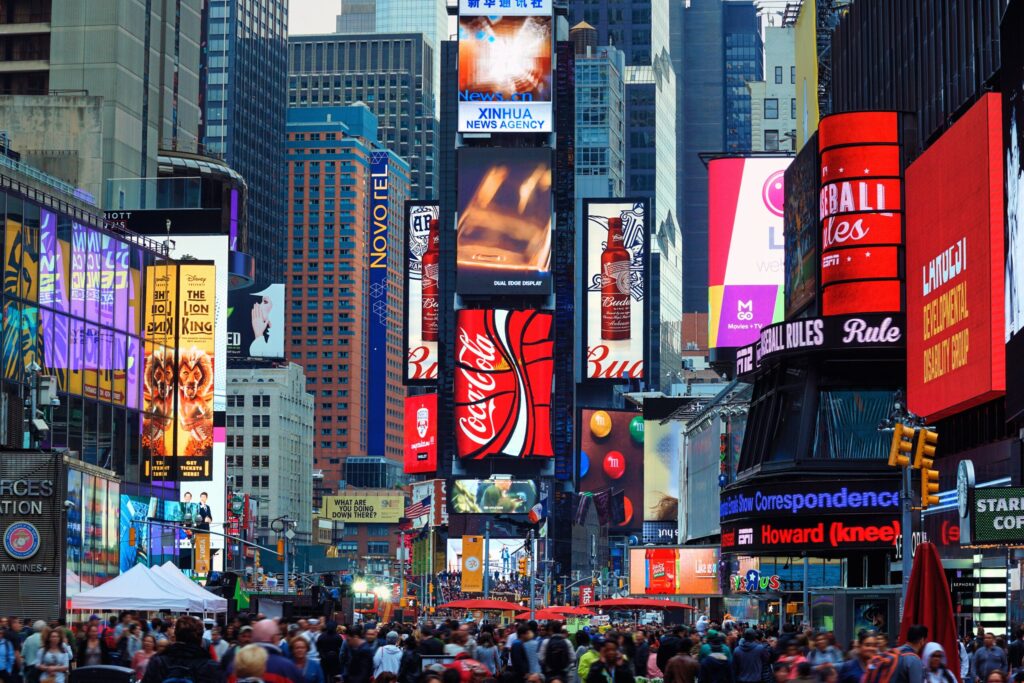 In a few years, the unlimited soup, salad and breadsticks at the Olive Garden might not be the only jackpot that awaits tourists heading to New York City’s Times Square.

Developer SL Green Corporation and Caesars Entertainment — owner of casino resort brands like Caesars Palace and Harrah’s — want to put a casino in a skyscraper at 1515 Broadway in Times Square near West 44th Street, the New York Times reported earlier this month.

SL Green already owns the building, and the Caesars Palace Times Square proposal calls for incorporating the Broadway theater that hosts “The Lion King” musical into the development. A hotel, wellness center and restaurants are also expected to be a part of the Manhattan casino resort should it nab one of three gaming licenses to be awarded for the New York City area.

The proposal isn’t the only one trying to bring state-regulated slot machines and poker tables to Manhattan.

Wynn Resorts, in partnership with developer Related Cos., wants a casino to spring up at the Related-developed Hudson Yards project on the western edge of Manhattan. A casino theoretically would breathe new life into the complex, billed as the largest privately developed real estate project in U.S. history.

Hudson Yards opened with great fanfare in 2019 but lost some of its luster amid the arrival of the pandemic, with office demand cooling off and a much-hyped Neiman Marcus department store closing.

Additionally, bids are in the works for Brooklyn’s Coney Island as well as Queens, where the New York Mets owner is in talks with Hard Rock to develop a casino resort next to Citi Field baseball stadium.

Those properties, MGM Resorts International’s Empire City Casino in Yonkers and Resorts World New York City in Queens, would be faster projects to open than the Wynn or Caesars bids due to their existing gaming footprint (though, both Empire City and Resorts World are slated to get significant investment to boost the gaming experience should they win out).

The Wynn/Related deal is a lot more complex than the Caesars proposal, which involves an existing skyscraper. The proposed Wynn casino, which would go next to the Javits Convention Center, would require building a 10-acre deck over active train lines. There would also be a lengthy planning and approval process.

Of course, Caesars doesn’t necessarily have it in the bag, either. Just because the proposal would include the home of “The Lion King” musical doesn’t mean Broadway is putting out the welcome mat for a casino to go up near the Great White Way.

The Broadway League, which represents the theater owner and producer community, informed members it would not support the casino proposal in the neighborhood.

“The addition of a casino will overwhelm the already densely congested area and would jeopardize the entire neighborhood whose existence is dependent on the success of Broadway,” the league said in a statement to the NYT. “Broadway is the key driver of tourism and risking its stability would be detrimental to the city.”

On the other hand, the Actors’ Equity Association, a labor union that includes Broadway actors and stage managers, supports the bid and said in its own statement “a Times Square casino would be a game changer that boosts security and safety in the Times Square neighborhood with increased security staff, more sanitation equipment and new cameras.”

Having Broadway theaters at a casino front door may not be as great as it sounds from a financial perspective, however.

Casinos in urban markets like Detroit and Cleveland didn’t live up to pre-opening financial expectations. Additionally, gaming revenue at the Horseshoe Casino in Downtown Baltimore brings in less revenue than more suburban casinos in Maryland.

“You look at big-city casinos, and they’ve all underperformed,” Woinski said. “I don’t know why these companies keep doing this over and over again. Harrah’s New Orleans went bankrupt twice. They just don’t do well. No. 1, there’s too much competition for entertainment dollars. And No. 2, no gambler wants to have a problem getting to or from a casino.”

Enough room to go around

It wasn’t long ago when analysts were concerned about a cannibalization effect taking place on the East Coast with gaming revenue, as more states legalized gambling in an effort to keep residents from crossing state lines to spend money at a casino.

But the pandemic sparked a surge in domestic, leisure travel — a major win for casinos. The $14.31 billion in U.S. gaming revenue reported for the first three months of this year was the strongest start to any year in reporting history, according to the American Gaming Association.

The financial windfall can obviously change by the time any of these casino bids in New York state get an official green light, but data like that certainly fuels the state’s motivation to get in on the casino resort action.

A final decision on who wins the coveted casino licenses isn’t expected until next year at the earliest.