The first time Hayley Kiyoko performed on a two-foot-wide stage, she was playing at a mall in Oregon for five people. It was around 2013 and she was promoting one of her earliest records, A Belle to Remember. The night before Kiyoko speaks with SPIN, however, was notably the first time since then that she had played a gig on a stage that small—and it happened to be her most memorable one yet—the first-ever Pride performance at Vice President Kamala Harris’s residence where rainbow balloons, streamers and lights adorned the home. “It was just a casual pool party at the vice president’s residence,” the singer quips over Zoom, tucking a strand of her light blonde bob behind her ears.

Kiyoko has come a long way from that mall gig in Oregon. Since the release of Kiyoko’s 2018 debut album, Expectations, the singer has earned a rabid fanbase that christened her as “Lesbian Jesus.” Along the way, she even performed with Taylor Swift live onstage and earned a spot in the singer’s music video for “You Need to Calm Down.” But during the height of her success, the pop star was struggling. After hitting her head at a Real World/Road Rules birthday party in 2016, she found herself battling post-concussion syndrome and depression, among other health issues that had hindered her daily life. While Kiyoko could easily go into “a four-hour deep dive” about the aftermath of her concussion, the condensed version is that she ended up on so much medication—a gallon-size Ziploc bag of them, to be precise—that she was getting side effects that could only be alleviated with more medication. 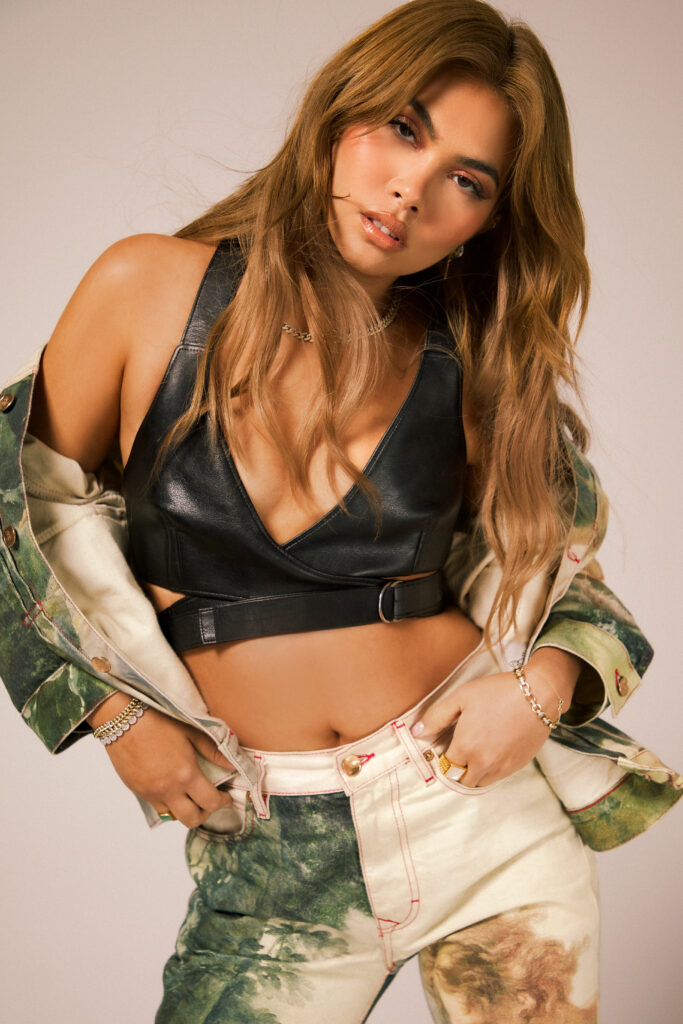 “I was in a rabbit hole of not figuring out what was wrong with me and had all of these emotions covering up what the root of the issue was, but it’s it’s really hard when people have health issues because the health system is really challenging,” she says. “There’s not a lot of support, and everyone’s just guessing.”

Though she was already in the process of trying to heal her body, when the pandemic hit in early 2020, Kiyoko was largely forced to focus on her health—something she hadn’t fully dedicated the time to do beforehand. “I feel like life gets so crazy, and it’s hard to take care of yourself. It’s hard to do things for you and make that a priority. So I was very grateful to be forced to do that in that time,” she explains. During that time, she discovered that most of her issues were caused by inflammation. “I started healing myself with food, and it’s changed my life,” she smiles.

But during that time, Kiyoko was working on a solid chunk of what would become her sophomore record, Panorama. The maximalist first single from the album— “Found My Friends”— honored how self-reliant Kiyoko had learned to become throughout her health issues. It wasn’t something friends could necessarily help with. But after a lot of work on her own— reading, countless doctor appointments and a switch to an anti-inflammatory diet—that Ziploc bag of pills is gone. “Friends can’t fix your problems,” the singer says of the song’s meaning. “You have to fix your problems yourself.” That, too, was healing.

While Kiyoko wrote Expectations and released it soon after, she had a lot of time to sit with her next LP—approximately a year and a half. Before she ever shared it with others, Kiyoko was able to develop a strong bond with her latest release. “It’s been an interesting process because the album has really been a support and comfort to me throughout the last year—and I didn’t really get to have that experience with my first album,” she says.

Kiyoko considers Panorama to be “a more refined version” of who she is. “I was, on a personal level, basically being broken down and having to put myself back together with my health issues,” she explains. “And I think that paralleled my music where I was breaking things down and kind of ‘spring cleaning.’” 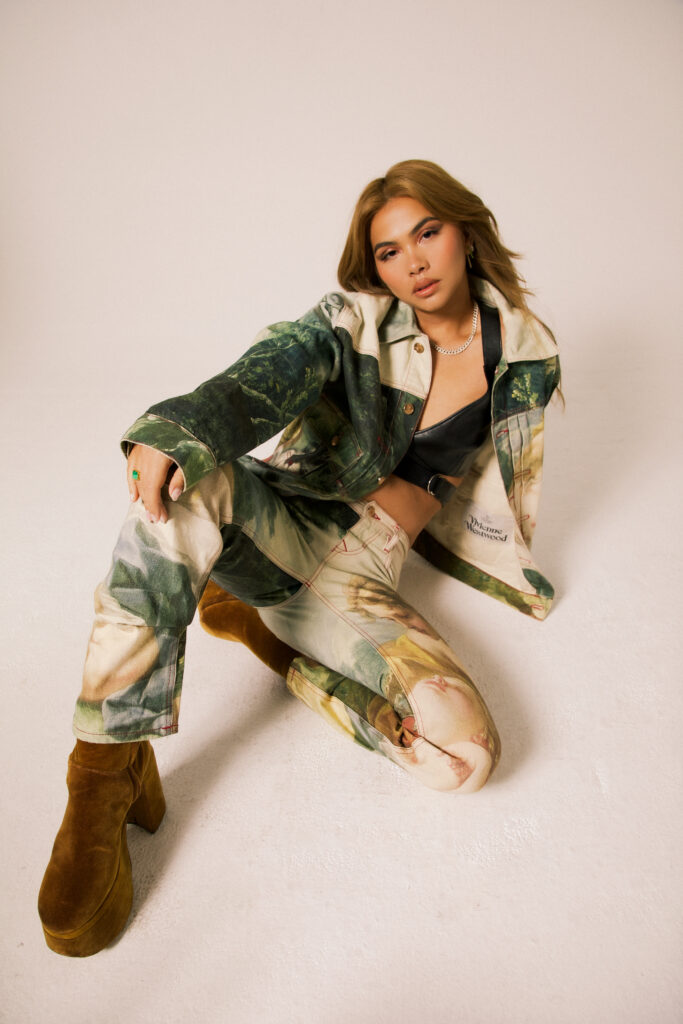 Along the way, Kiyoko needed some help to deliver a cohesive message as she was rebuilding, so she enlisted Danja (Mariah Carey, Britney Spears, Justin Timberlake) as an executive producer. Together, Danja and Kiyoko’s visions aligned. The pop singer recalls she watched a handful of high-stakes action movies with the producer, who also calls himself Bruce Wayne.

“He’s obsessed with Batman, and I’m obsessed with hope,” she says. “I wanted to have this visual yearning of hope, but also this energy and adventure to it.” For her, “high stakes” was a throughline. “Every lyric, every melody, everything that you hear sonically was actively decided,” she recalls. “Everything was intentional.”

One of the most intentional parts of Panorama came with the release of the album’s third single “For the Girls,” one of the first women empowerment anthems the singer has ever released. The cheeky, summer bop became part of a larger cultural conversation when Kiyoko released its music video in late May. Kiyoko not only created her own three-minute version of the ABC reality show The Bachelorette, but had a headline-making reveal at the end of the visual—she was dating Becca Tilley, a contestant on Season 19 of The Bachelor and had been for four years.

The music video was multi-pronged: it paid tribute to Tilley’s time on the show, and to Kiyoko’s love of reality TV and dating shows. “We watch The Bachelor every Monday night,” she notes.” Directed by Kiyoko, the music video was actually cast and shot like a reality TV show. Kiyoko cast 15 queer contestants and met with them over Zoom to get to know them before deciding what their personas would be. During filming, everyone had a cheat sheet guiding them through the drama—whether they’d steal a rose or be a villain. The best part? “No one knew who was playing who,” Kiyoko exclaims. “So it really felt like a reality show.” Kiyoko has always wanted to be “The Bachelor,” so it was a dream come true. “I literally could have shot like a full season with these contestants,” she admits.

Kiyoko, however, doesn’t ignore the darker moments of the past few years on Panorama but she does douse them in a glittery sheen. The catchy dance-pop cut “S.O.S.”—or “same old shit”—was inspired by a moment that prompted Kiyoko to start therapy. “[It’s about] having this head-to-head moment where you’ve tried everything to keep this relationship going, and each person has both tried everything and it’s like, ‘Is it too late to try to save this or is [a breakup] inevitable?’” she says of the track. The same goes for “Flicker Start,” which was inspired by a time pre-pandemic when Kiyoko was extremely depressed, in tears and needed to escape. But she opted for a glossy synth-pop ode to hope instead of something more maudlin.

That sense of hope is what propels Kiyoko—it’s what drives her. Despite what she’s been through, she’s never lost sight of her goals. “I want to be a mainstream pop star, direct movies and television shows and continue to be a storyteller,” she explains. Along the way, she also wants to make some new friends by collaborating with some very specific artists. “I love Harry Styles. I feel like Harry and Hayley is definitely a moment that needs to happen. I love Dua Lipa, a little choreographed moment would be lovely. I’d love to get Missy Elliott on a track,” she reveals. But no matter who Kiyoko works or what she does, she will always have one particular goal in mind: “To normalize queer artists and inspire hope.” Amen, Lesbian Jesus.