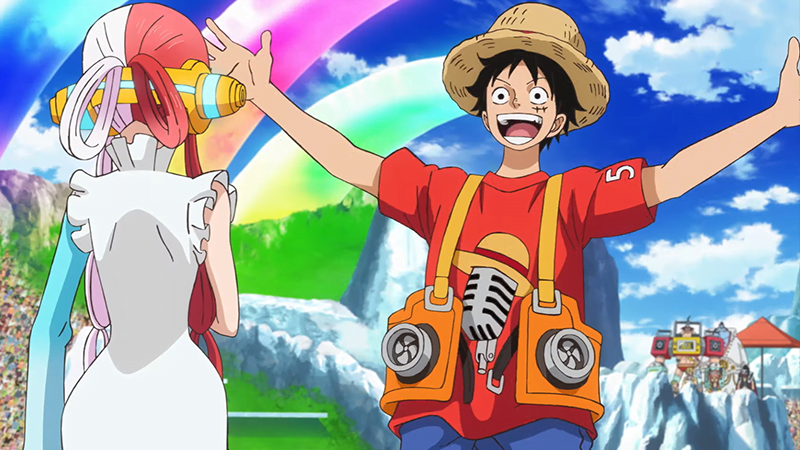 One Piece Film: Red is the latest film set in the universe of the world’s highest-selling manga. I’ve been a One Piece fan since they first published Shonen Jump in North America, so this continued investment meant my expectations for Film: Red were through the roof. Even with that in mind, I was blown away by the movie and entirely pleased with this latest Straw Hat journey.

Though not canon, the film is set around the Wano arc and follows the Straw Hat crew as they attend the first live concert performed by Uta — a famous singer who is Luffy’s childhood friend and Red-Haired Shanks’ daughter. While this review is largely spoiler-free, the movie itself does spoil certain elements of the anime, with one spoiler for a part of the story that hasn’t been animated yet (as of the writing of this review). That said, casual fans can still have a great time with Film: Red, as it’s a brilliant movie that doesn’t require much knowledge of One Piece to be a blast.

The first half of the film features quite a few songs, but it doesn’t feel disruptive. The music in One Piece Film: Red is incredible, largely thanks to the vocal talents of Ado — the Japanese idol singer who provides Uta’s singing voice. The different songs she performs throughout the film are incredible and often poignant, perfectly establishing a variety of tones as the narrative progresses. They also represent Uta’s own progression beautifully, truly hammering home her emotional character arc.

Film: Red excels at character moments, providing excellent interactions between the main cast and the returning characters. I was impressed at how unusual some of the character choices were, with less prominent characters like Blueno and Bartolomeo playing key roles in the plot. This is similar to how the previous film, Stampede, highlighted characters and character combinations that the main series simply couldn’t, and just like in that situation, it turns out to be one of the highlights of the film.

I do wish just a bit more emphasis was put on Shanks given how important he is to the core story of the film. It takes a good while for the legendary pirate to show up, though once Shanks arrives, he certainly makes an impression fitting of his colossal reputation. We get to see Shanks and his crew so rarely that I can’t help but wish we got a bit more time with them here, but given the incredible and exciting nature of what we do get, I can’t complain too much.

Naturally, the action in Film: Red is dynamic and thrilling. This is especially true towards the end of the film, where two crews are working simultaneously to defeat the final antagonist. There are plenty of sequences of different characters using their unique abilities, from Law’s classic Room skill to Shanks’ ridiculous Conqueror’s Haki. There’s even an early animated peek at a power that hasn’t been seen in the anime yet, which induced a great deal of hype in the context that it was used.

I also appreciated how much One Piece humor is present. Somehow, this series is able to find endless comedy in Luffy’s simple mind and thought process — possibly due to how earnest and endearing he is. While Luffy certainly has many serious moments throughout the film, there’s lots of comedy to balance the tone out. It doesn’t take away from the heavier moments, which hit hard, but they keep that wonderful One Piece tone intact. One Piece is all about fun and adventure in even the darkest circumstances, which Film: Red seems to completely understand.

One Piece Film: Red is an excellent encapsulation of everything that makes One Piece so beloved. There’s plenty of action, humor, and heart, all doled out in equal measure. Whether or not you’re a massive One Piece fan, Film: Red will entertain you for the entirety of its runtime and remind you of what it is that drew you to the series in the first place.

As ComingSoon’s review policy explains, a score of 9 equates to “Excellent.” Entertainment that reaches this level is at the top of its type. The gold standard that every creator aims to reach.