The list of undefeated teams in college football was shortened on Saturday. UCLA, Ole Miss and Syracuse all entered Saturday undefeated, but will head into Week 9 with losses. LSU is in the SEC West driver’s seat, while Oregon is a legitimate threat in the Pac-12.

There isn’t a quarterback controversy at Clemson, according to head coach Dabo Swinney. But some fans will be calling for it. Entering the game as the starting quarterback, DJ Uiagalelei was benched in the third quarter after his second interception. The Tigers put in Cade Klubnik, who led the team on a touchdown drive to take the lead.

Cade Klubnik of the Clemson Tigers celebrates a touchdown against Syracuse. (Photo by Eakin Howard/Getty Images)

Following the game, Swinney made it clear that DJ Uiagalelei was the starter going forward, comparing his Saturday to Steph Curry having a bad game. Well, that can be the case, but this Clemson offense struggled for most of the game. The Tigers have a bye-week before playing at Notre Dame in two weeks. Dabo better figure this thing out if they plan on making a late-season run towards the playoffs.

A massive game from quarterback Jayden Daniels propelled LSU to a win over previously unbeaten #7 Ole Miss 45-20. After trailing in the first quarter, the Tigers outscored the Rebels 42-3 over the next three frames. And they used five touchdowns from Jayden Daniels to do so. The Ole Miss offense looked stale after the first stanza, with quarterback Jaxson Dart finishing the game with 284 yards passing and an interception. 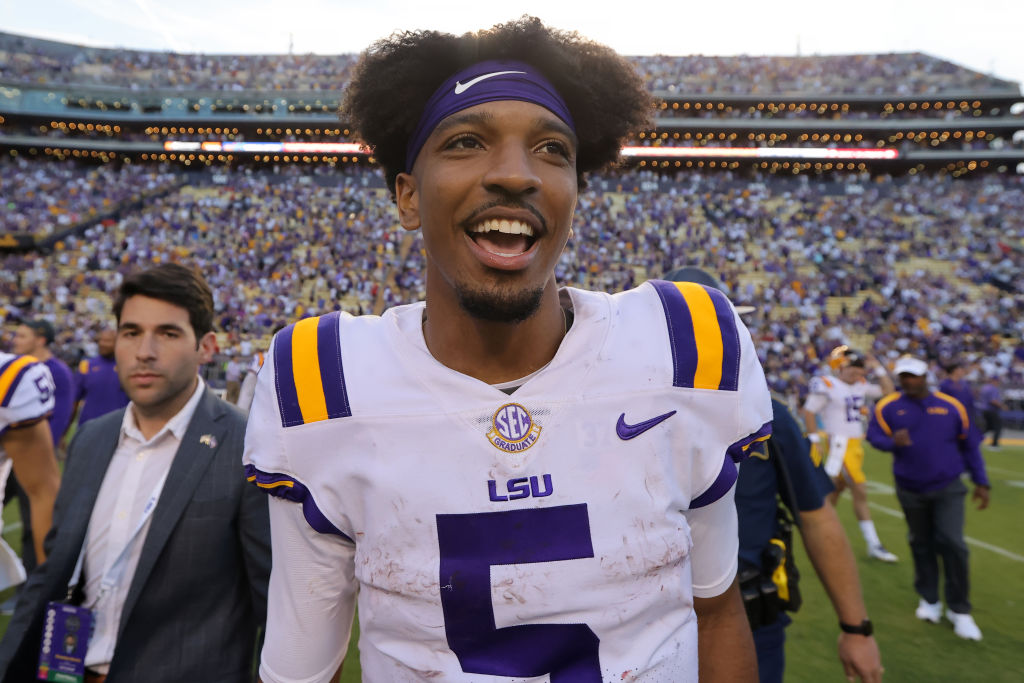 Credit to the Tigers, who have now followed up the embarrassing loss to Tennessee with wins at Florida and now Ole Miss. Also, LSU controls its destiny in the SEC West, with a matchup coming in two weeks with Alabama in Baton Rouge. As for the Rebels, they’ll play Texas A&M next week, looking to respond to the rough loss on Saturday.

The first game of Oregon’s season against Georgia was an embarrassing moment, but the Ducks have responded in a big way. Led by QB Bo Nix, the Ducks defeated UCLA 45-30, ending the Bruins undefeated season. Nix finished the day with 263 yards passing and 5 touchdowns, causing problems for Chip Kelly’s squad all afternoon. 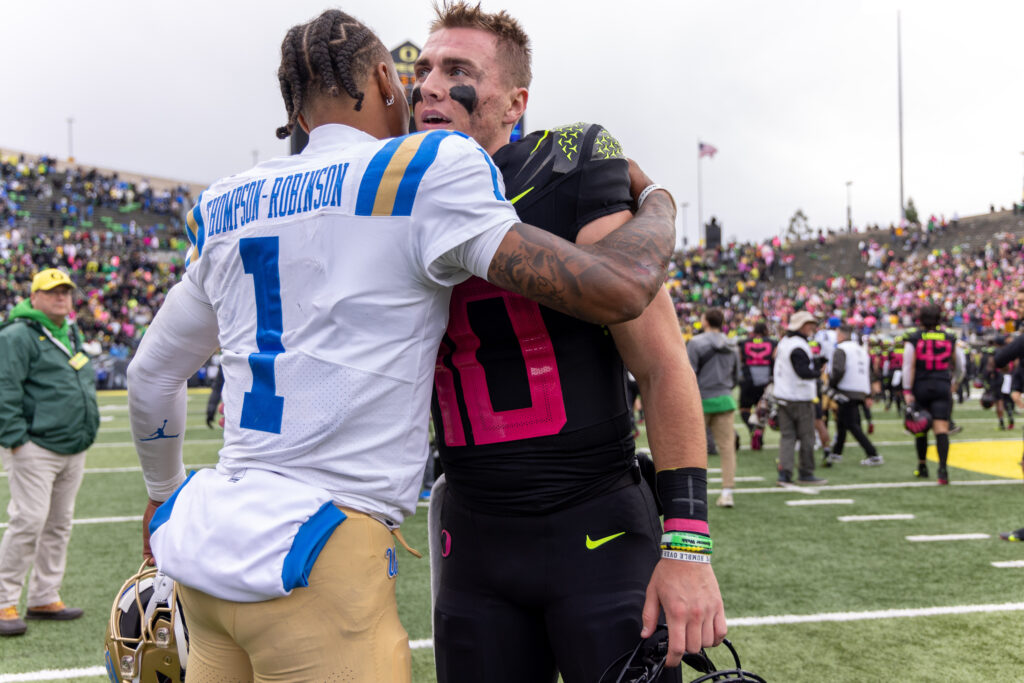 The Ducks seem poised to make a run at the Pac-12 championship if they can keep this up on offense. This looks like a totally different team than the one I witnessed get blown out by Georgia to open the season. Next up, Oregon travels to Berkley to take on the California Bears.

Texas squandering double-digit leads is starting to become a trend for Steve Sarkisian and the Longhorns. Leading 31-17 at the 3:43 mark in the second quarter, Oklahoma State would end up winning 41-34, as Sarkisian moved to 10-10 overall in Austin. Quinn Ewers attempted 49 passes, completing 19 of them for 319 yards, with two touchdowns and three interceptions. 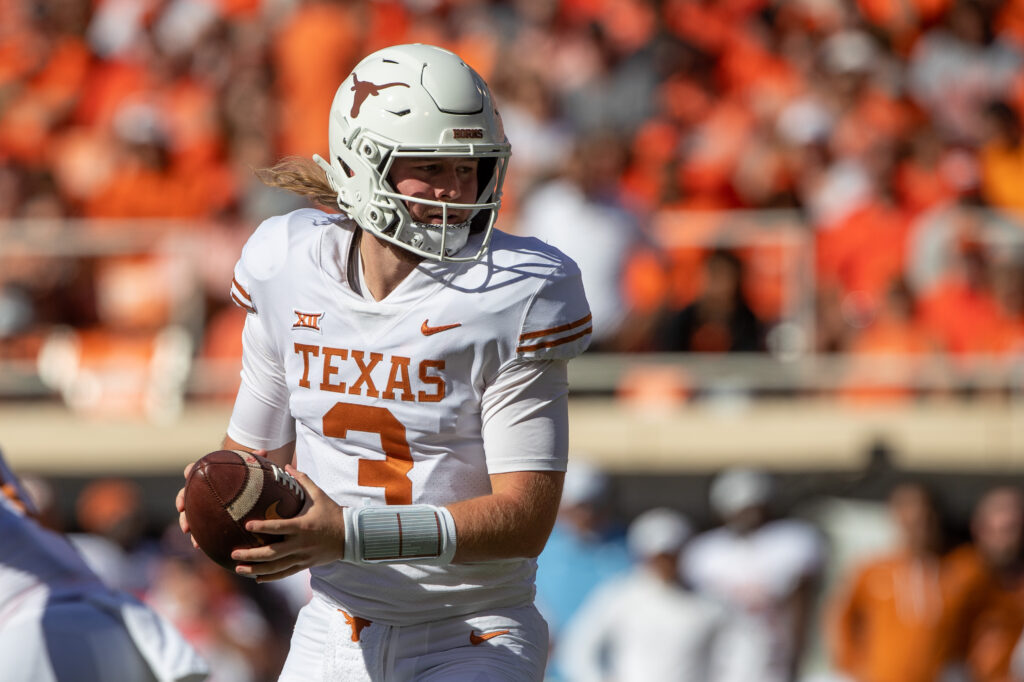 Credit to the Cowboys for not giving in and completing the comeback with the go-ahead touchdown late in the fourth quarter. Spencer Sanders finished the game 34-57 for 391 yards and two touchdowns, leading his team to the win. It should be noted that Texas was favored coming into the game, but its safe to say things are not well in Austin. Next up, Oklahoma State plays Kansas State, while Texas has a bye-week before playing Kansas State.

TCU Remains Unbeaten After Looking Prime For A Loss

It was all Kansas State for a while, leading 28-10 at one point, but TCU wouldn’t go away. Thanks to QB Max Duggan, who threw for 280 yards and 3 touchdowns, the Horned Frogs stormed back to win the game 38-28. TCU is now sitting atop the Big 12 Conference with the comeback win. TCU has won four straight games over ranked teams.

A massive win for new coach Sonny Dykes, with his team likely to move up a spot on the new polls released on Sunday. Next up, TCU visits West Virginia.

It turned out to be a pretty exciting Saturday of football, with another slate of pivotal games awaiting next weekend. We’re getting closer to the first CFP polls being released, which will give us a glimpse at the playoffs.