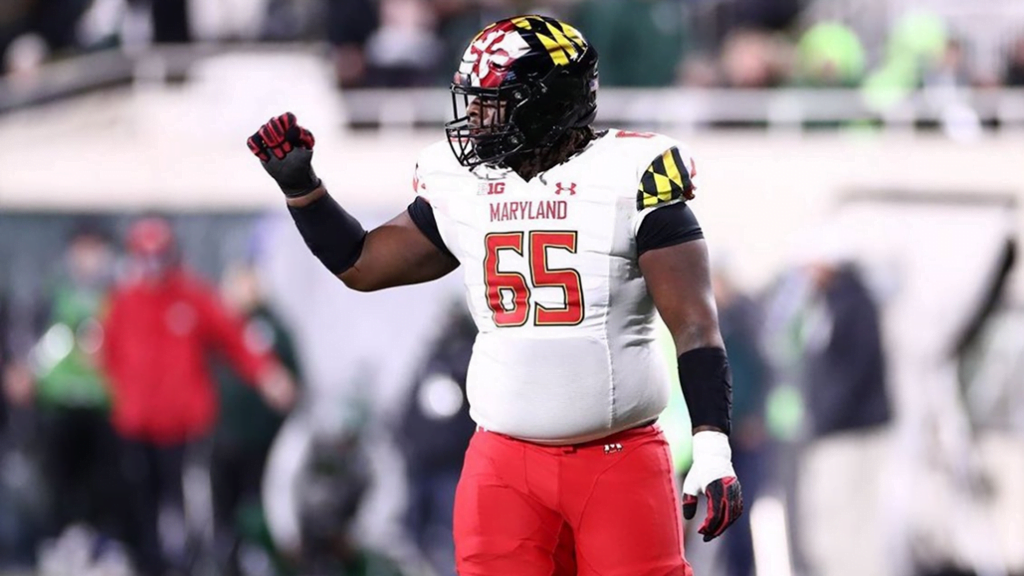 Maryland offensive lineman Johari Branch committed the best penalty of the season on Saturday. He got flagged for excessive celebration in the funniest way possible.

Branch, who stands 6-foot-3, 330 pounds, was the No. 2-ranked JUCO guard in the Class of 2020 and chose to play for the Terps over Purdue and UAB. His decision paid off, because the Chicago-native has been a crucial piece for head coach Mike Locksley.

Over the course of his first two years in College Park, Branch started 18 games at left and then right guard. He has started primarily at center in 2022, but moved back over to guard on Saturday against Northwestern.

His versatility on the line is crucial for Maryland and it stems from Branch’s athleticism. He, as previously stated, is a large human being.

However, based on how he can get up and go, you might not know. He can SCOOT!

That was on full display during a crucial run in the fourth quarter. With the game tied at 24, running back Roman Hemby added to his 24 carry, 179 yard, three touchdown game by breaking a 75-yard touchdown to take back the lead.

If you look closely at the right side of the line, you can see Branch at left guard. Once the ball is snapped, he plays a big role in clearing the hole for Hemby, blocking down at the nose tackle and then moving on to the second level and sealing off a linebacker.

Once the Terps ball-carrier is on his way to the end zone, Branch takes off after him. He got on his horse and followed Hemby all of the way down the field.

Upon reaching the end zone, Branch decided to join in on the celebration and hit a cartwheel across the goal line. It was extremely fluid for someone of his stature, but the officials didn’t enjoy it as much as everyone else. He was flagged for unsportsmanlike conduct.

Maryland won the game despite the late flag, so it was negligible in the end. And thank goodness that it was, because Branch’s cartwheel was an all-time penalty. Big men are the best athletes on the field!