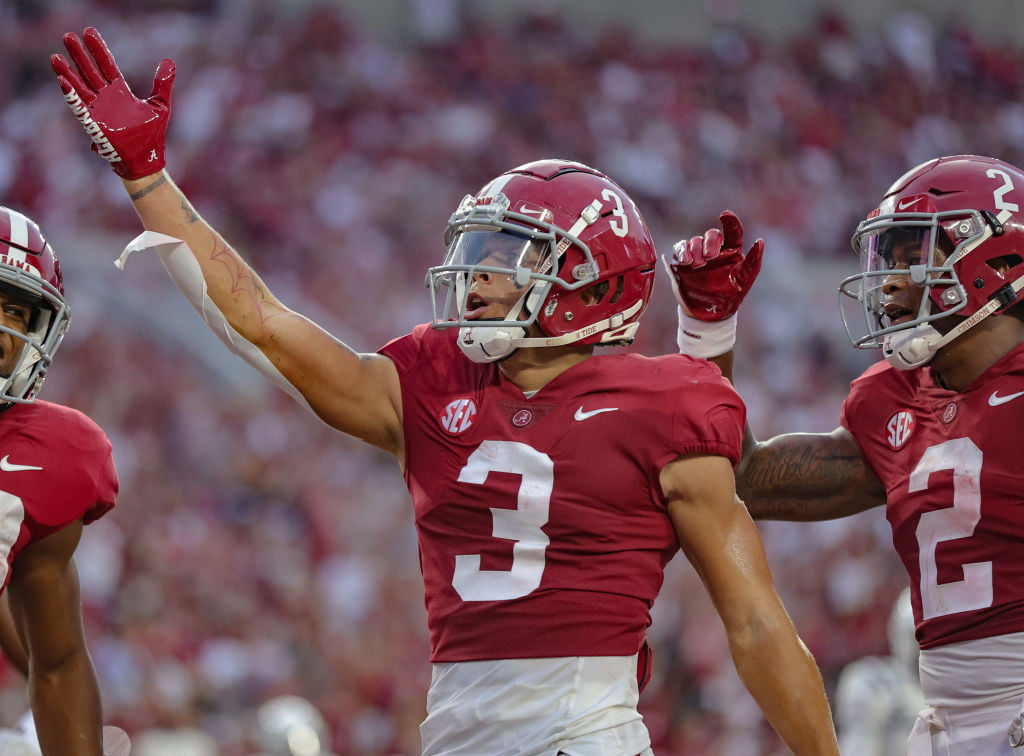 Jermaine Burton is on the field and playing tonight for the Alabama Crimson Tide, and both Nick Saban and ESPN got absolutely torched for it.

One week after a video showed Burton appearing to strike a female Tennessee fan on the field following the loss to the Vols, the receiver was active and started for Alabama Saturday against Mississippi State.

Saban was asked about the incident earlier this week, and said the team handles “discipline issues internally and that’s the way we’ll handle this.”

Burton’s status for Saturday’s game was in doubt all week, but the junior was dressed and played against the Bulldogs.

Burton caught one pass for 23 yards in the first half as Alabama cruised to a 24-0 lead.

Jermaine Burton is playing for Bama tonight? Am I the only one that thinks this is insane?!

At best, he shoved a female fan last week. At worst he punched her.

I dont care if she was on the field or not.

This is embarrassing for Nick Saban.

Why is no else talking about this?

Still cannot believe Nick Saban and @AlabamaFTBL let Jermaine Burton play this game and get away with hitting a female.. what does this teach. Regardless of TN fans storming the field. You still respect a woman and keep your hands off of them. #disappointed

The fact Jermaine Burton, not only is playing in this game but is starting makes me think so much fucking less of Nick Saban

Wonder why J Burton is on the field playing for Alabama. Did he took a swing at a Tennessee Fan last week. Does Nick Saban only cares about winning with no INTEGRITY to punish players?…….Just saying…..

Nick Saban wasn’t the only one feeling the heat Saturday night.

College football fans also called out the ESPN crew of Chris Fowler and Kirk Herbstreit, who were calling the game.

The duo discussed the situation after Burton’s first catch midway through the second quarter, and several fans took issue with them “dismissing” the incident.

Umm. @espn should be ashamed. Chris Fowler and Kirk Herbstreit excusing/dismissing Burton hittin a female fan after we ALL SAW THE VIDEO is pathetic. BAD look. ESPN. Bad.

What about then trying to justify Jermaine Burton assaulting a woman. I have hated Fowler and Herbstreit for awhile but this just made it worse

Are these clowns really trying to justice Burton’s actions saying he felt he was in danger when he hit the young lady after the game! Saban supports that action!

The Tennessee fan, Emily Isaacs, was among thousands of people who rushed the field after Tennessee’s 52-49 win over Alabama. A video circulated Tuesday on social media showed her being struck by Alabama’s Jermaine Burton as he was leaving the field.

A TikTok user accused Isaacs of sticking her phone in the face of Burton prior to the player allegedly striking her. Isaacs responded to that comment on TikTok by saying her phone died in the first quarter and was in her purse after that.