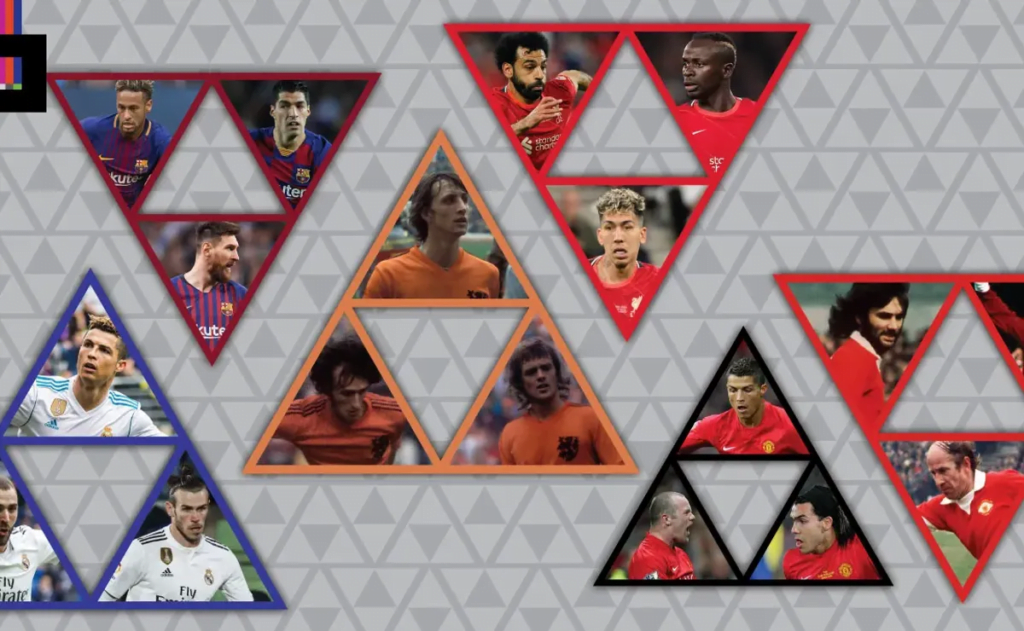 Ranking players and teams across generations is incredibly difficult. It brings with it a whole host of issues. Most notably, the game of soccer has changed so much over the years.

However, one thing that hasn’t changed is that putting the ball in the back of the net remains the hardest and most valuable aspect of the game.

Over the years we’ve been gifted enough to witness many of the greatest attacking tridents to ever play the game… but just which trio have been the best?

Statistics don’t always give an accurate view of just how good an attacking trio is.

The Dutch team that came oh so close to winning the 1974 World Cup was fabulous.

The Netherlands played a brand of football that is still referenced and replicated to this day. It boasted one of the most gloriously skillful front tridents ever.

Rob Rensenbrink was the silky dribbler who could make magic. Meanwhile, Johnny Rep had a little more steel about him and could find the net. Johan Cruyff remains one of the most influential geniuses to grace the game. He tied it all together from the middle.

Playing together for such a short time prevents them from being ranked higher in the list of greatest attacking trios in soccer history.

Liverpool have Jürgen Klopp and Michael Edwards to thank for the greatest attacking trio in Anfield history.

Mohamed Salah, Roberto Firmino and Sadio Mane all arrived on Merseyside as good individual players with potential. No one considered any of them world class talent upon getting to the club.

However, playing together unlocked something in each of them and they went onto produce mesmerizing football for the Reds.

All three let their mark on a team that won a Champions League title and Premier League crown at Anfield. In their tenure together, the three players combined for 338 goals.

Neymar and Luis Suarez’s arrival gave Barcelona an injection of talent that the club needed.

Lionel Messi had run out of suitable playmates after the departures of Thierry Henry and Samuel Eto’o. Neymar and Suarez formed an instant bond with the Argentine.

Playing in Luis Enrique’s more vertical system, Los Cules were back amongst the goals. The trio won the Champions League in its first season together.

Sir Alex Ferguson spent time constructing his 2008 Manchester United team, but boy was it worth the wait.

Cristiano Ronaldo and Wayne Rooney developed together into two of the best players in the world. Adding Carlos Tevez to that felt unfair.

The Argentine’s industry was perfect. He and Rooney did much of Ronaldo’s dirty-work. United swept back-to-back Premier League titles. At the same time it reached consecutive Champions League finals. It won that famous final in Moscow in 2008.

Manchester United’s modern-day story is built upon what happened after the Munich Air Disaster of 1958. Through the incredible perseverance of Jimmy Murphy and Sir Matt Busby, it took just 10 years to build a team that could win the European Cup.

At the epicenter of that team was the attacking trio of George Best, Denis Law and Sir Bobby Charlton.

The chemistry between a trio that became known as ‘the United Trinity’ was instant and the goals flowed. Denis Law won the Ballon d’Or in 1964. The trio were all present for the European Cup win in 1968.

This is not necessarily the greatest selection of individual talent on the list of greatest attacking trios in soccer history. Yet, that says a lot given there are now two Ballon d’Or winners in this trio.

Winning trophies is what soccer is all about ultimately, and nobody did it better than the 2013-2018 Los Blancos trio.

Cristiano Ronaldo and Karim Benzema had been signed together in the summer of 2009 and had developed an understanding.

However, it took until 2013 for Los Blancos to add a genuine star to play on the left of the aforementioned pair.

The chemistry was instant and their talent clear. Ronaldo scored goals on a relentless scale. Benzema did the hard-work for both of his teammates. Bale brought sheer speed and creativity.

The blend was perfect. This trio formed the heart of Real Madrid winning four Champions League titles in a five year span. That includes an unprecedented hat trick in 2016, 2017 and 2018.

In their time playing together, the BBC scored more than 400 combined goals in all competitions. No trio matches this feat any time soon.