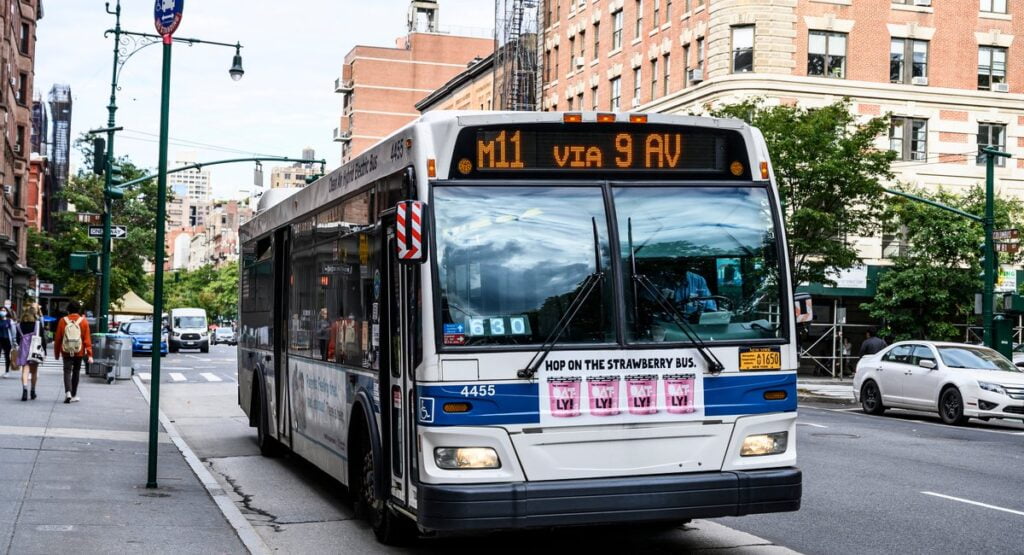 Promises to improve city bus service have stalled, transit advocates said, so they made a pit stop at Brooklyn Borough Hall on Monday to call on the new mayor to get progress back into gear.

The original Better Buses campaign for better service in New York City launched in 2016 with help from the Bus Turnaround Coalition, which assembled advocacy groups like Riders Alliance and Straphangers Campaign to float policy recommendations to revamp bus routes and increase bus speeds. And while there have been advances as a result of those efforts, advocates said it was time for Mayor Eric Adams and Gov. Kathy Hochul to put their feet back on the gas.

Pedro Valdez-Rivera, 30, of Riders Alliance, lives in Bedford-Stuyvesant and said the bus route he frequents is often blocked by vehicles in the bus lane.

“There’s so much double parking around the areas of business,” he said at the rally. “The bus often has to let us out on the street because the bus is not able to reach the curb.”

Riders Alliance chalked up previous efforts like the 14th Street busway and the Bronx bus route redesign — which is currently underway — as successes under former Mayor Bill de Blasio. They also heralded the installation of transit signal priority, a technology that turns red lights to green when buses approach.

A release from Riders Alliance said that while some things like pilot bus routes, all-door boarding and plans for redesigned bus networks were in the works, they still needed another push under new city and state leadership to get across the finish line.

“New York’s millions of bus riders need our mayor and governor to do more and better than any who came before them,” Riders Alliance Senior Organizer Jolyse Race said in the statement. “The last administration in City Hall laid the groundwork and built a toolkit for faster buses. Now it’s up to Mayor Adams to bring the program to scale and deliver much faster service for bus riders in every neighborhood across the city. Gov. Hochul must in turn ensure that the bus network redesigns are successful and the MTA has the resources to add service on key routes — and finally open up the back door for boarding riders citywide.”

Buses were measured at an average speed of 8.1 miles per hour citywide in December 2021, which was under the target that de Blasio set when he promised in 2019 to increase average bus speeds to 9.03 mph by the end of 2020.

At its outset six years ago, Adams came out in support of the coalition when he was serving as Brooklyn borough president. And on Monday, the support system was bolstered when borough presidents from Brooklyn, Queens and Manhattan said they were all on board, along with newly elected City Councilman Lincoln Restler of Brooklyn and Comptroller Brad Lander.

“Our city’s workers and commuters rely on a public transit system that serves our city equitably and reliably,” Lander said in a statement. “City Hall promised to expand our bus lanes by 150 miles over the next four years to keep this city moving and my office will monitor compliance with these plans. But these expanded bus routes must also match 21st century travel patterns because outdated route patterns lead to service cuts and deny riders crucial access. Our city cannot move forward without a robust bus system, and riders deserve no less.”

Brooklyn Borough President Antonio Reynoso joined with borough presidents Donovan Richards of Queens and of Mark Levine of Manhattan to throw their weight behind the Better Buses revival.

“Developing more efficiency in our bus routes, integrating technology in the rider experience, and investing in our commuters will help New Yorkers live an easier life but also encourage them to rely less on cars, a necessary step in our fight against climate change,” Reynoso said.

Department of Transportation Commissioner Ydanis Rodriguez said he agreed to work with the coalition to see more of its policy proposals come to fruition.

“We have worked closely with the MTA, advocates, and community residents to significantly improve bus speeds, but there is much more work to do – that’s why Mayor Adams and I have a bold plan to create 150 miles of new busways and bus lanes across the city, speeding up buses and reducing wait times for New Yorkers,” Rodriguez said in a statement. “We look forward to our continued partnership with the Bus Turnaround Coalition and anyone else committed to helping buses get New Yorkers around the city more quickly and safely.”

In August 2021, the MTA and the city Department of Transportation launched a joint initiative to improve bus service with several measures that were pushed by the Bus Turnaround Coalition, including better enforcement of cars blocking the bus lanes with automated ticketing and installing transit signal priority at 750 locations across the city. The MTA’s 2020-2024 capital plan called for spending $3.5 billion to improve service by purchasing more than 1,500 new buses — 500 of which would be all-electric buses.

MTA Chairman Janno Lieber, who has been leading the group since July 2021, said he would be prioritizing bus service as a “key component” of the group’s commitment to transit equity.

“The bus network serves all New Yorkers. It is especially critical to those who live farther from the subway, and bus riders tend to be from New York’s economically disadvantaged communities,” Lieber said in a statement. “That’s why every investment in bus service is an investment in equity. We need more bus lanes and bus ways, better signal priority, and more camera enforcement. These are key ingredients that make bus service faster and more reliable.”