Kylie Jenner and Travis Scott were spotted out hand-in-hand at celeb hotspot Catch LA in West Hollywood on July 9.

For their date night, the Kardashians star worked her famous curves in an orange draped mini-dress by Rick Owens, styled with matching clear, strappy sandals by Alexandre Vauthier and a cobalt blue Hermès mini-bag. For glam, Kylie left her signature dark locks down and put forward a full face of make-up.

The “Sicko Mode” rapper kept his look casual, wearing a statement sweater and a pair of jeans, adding a touch of glitz with a chain necklace.

It was a rare date night out for the low-key duo, who share Stormi Webster, 4, and a 5-month-old son, whose name has not been made public. Although Kylie, 24, and Travis, 31, regularly show up in each other’s social media posts, the last time the two were photographed out together was back in May at the 2022 Billboard Music Awards, where they walked the red carpet along with their daughter.

Kylie’s glamorous appearance there and on her recent date night with Travis come months after the Kylie Cosmetics founder admitted she has struggled “mentally, physically, spiritually” after welcoming her baby boy back in February 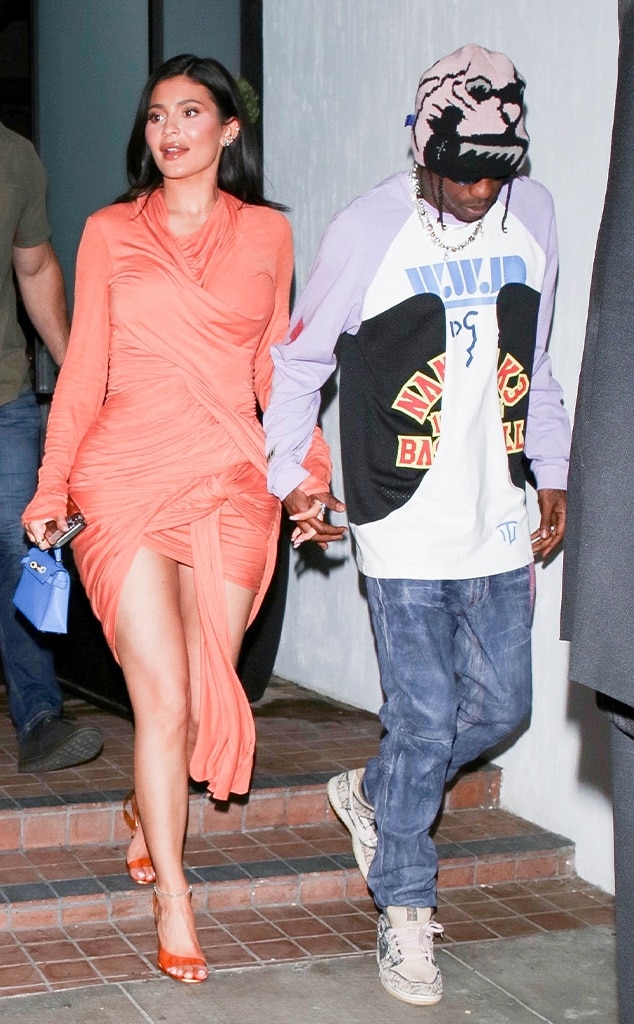 “I just want to say to my postpartum has not been easy,” she told her Instagram followers in March. “This experience for me, personally, has been a little harder than with my daughter.”

Sharing that she gained 60 pounds during her pregnancy, the makeup mogul explained that postpartum depression can affect a new mom in many different ways and thought it was important to share her truth with her fans.

“I didn’t want to just get back to life without saying that because I think we can look on the internet and you know, for other mom’s going through it right now, it might look a lot easier for other people and like put the pressure on us,” she continued. “But it hasn’t been easy on me either. It’s been hard and I just wanted to say that.”